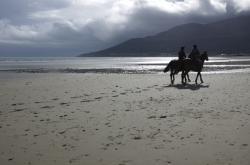 Situated in County Down in Northern Ireland, Ards Peninsula was formerly used by the RAF in World War II as the site of one of its many airfields. It stands between Strangford Lough and the Irish Sea on the north eastern corner of Ireland.

The reefs off the shores of the peninsula have claimed many a ship in days gone by, but the fishing port of Donaghadee offered safe haven to many a traveller over the course of the centuries. Notable visitors include Keats , Wordsworth and even the composer Liszt who came with a piano on board ship! The town has always been well known for its harbour and lighthouse and it is a key station for the RNLB rescue effort.

The area is a haven of tranquillity and offers historic sites such as the standing stones where the ancient Irish buried their dead. There is also a bird and wildlife sanctuary in the area for those interested in the natural sciences.

Ards Peninsula is within easy reach of Belfast which is only 18 miles away. It is also mere five miles to the south east of Bangor and makes a worthwhile destination if you are visiting that part of Northern Ireland

Other County Down Naturals