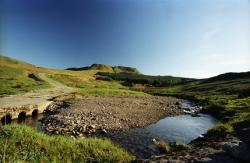 The Campsie Fells are a range of hills that stretch from east to west across central Scotland, with a summit of 1897 feet (578m) at Earls Seat. They run from Denny Muir to Dumgoyne in East Dunbartonshire. They sit between Endrick Water and the valley of Strathblane , which separates the Campsies from the Kilpatrick Hills to the west. They overlook the villages of Blanefield, Lennoxtown and Strathblane to the South and have the Fintry Hills to their North, with the Kilsyth Hills to the east. The range was formed by erosion along a geological fault called the Campsie Fault. This action resulted in tiers of rock left by the estimated 30 lava flows that date from the Carboniferous period. Three main rivers rise in the Campsie Fells, these are the rivers Carron, Endrick and Kelvin. In 1841, the English scientist
Michael Faraday (1791 - 1867) is attributed as having thought of the theory of electromagnetic induction while lost on these hills. Author and broadcaster Tom Weir (1914 - 2006), who became famous for his walks around Scotland, is commemorated there with a walking route and cairn. The Campsie Fells was a location used for the Monty Python film The Meaning of Life in 1982.