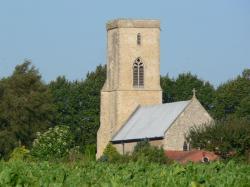 The Glaven Valley lies in a fenland area of the county of North
Norfolk, in England. It is in part of larger region known as East
Anglia. Glaven valley is formed by the River Glaven that flows for ten
and a half miles of picturesque countryside, in an area that is very
popular with tourists. The river rises in Bodham, two and a half miles
upstream of Selbrigg Pond. By this point the Glaven, Stody Beck and
Thornage Beck have combined to continue through the valley as the
River Glaven. As it progresses to the lower valley, the river runs
over mainly chalk beds. The river flows through Glaven Valleys arable
farm land and coniferous plantations in the upper reaches, near
Edgefield. In the middle of the valley there is a mix grazing meadows
and low-lying washlands, especially below Glandford Mill. Animals such
as water voles, otters, red deer and roe deer are present in the
valley. The valleys bird population reflects the wide range of
habitats there. There are reportedly around 126 species of birds
including the Kingfisher, barn owl, common buzzard and osprey known to
live in, or visit the valley. The osprey comes to Glaven Valley as a
stopover during a spring and autumn migration, probably stocking up
with some fish while it lingers.