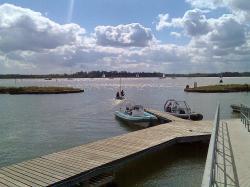 The River Orwell flows through the county of Suffolk. The name Orwell is supposed to have derived from river near the shore and is thought to be Anglo- Saxon in origin. The Orwell flows through Ipswich which was the main port in the area before the development of Felixstowe. The growth in size and importance of the port at Felixstowe was aided and accelerated by the building of the Orwell Bridge in the 1980s, this takes the A14 over the River Orwell. The River Orwells source river, above the tidal limit, is known as the River Gipping. The Orwell broadens into an estuary when it reaches Ipswich and joins with the River Stour at Shotley. It issues out into the North Sea at Felixstowe.

The river gave its name to local writer Eric Blair, who became famous as George Orwell and brought us Big Brother in his novel 1984. He loved the river and enjoyed inspirational walks along its banks. Today, you can visit the Nacton Picnic area which overlooks the mouth of the River Orwell and offers some great river views. It is a wonderful spot to sit and watch ships navigating the narrow channel up river to Ipswich.

The Orwell's mud flats are an important habitat for a wide variety of wintering birds. Between December and March the mud flats get very busy and, as a result, the bird watching is well worth travelling for.

Woolverstone Marina lies on the River Orwell in the historic city of Ipswich. Boats of all shapes and sizes are moored at the marina which is home to the Royal Harwich Yacht Club . Sailing is very popular on the Orwell and those without their own boat can always enjoy a ride on the Lady Orwell pleasure cruiser . The river also has close links with luxury yacht makers Fairline, who have an operation at Wet Dock and are a significant local employer.

The River Orwells estuary marks the southern most point of the beautiful Suffolk Coast and Heaths Area of Outstanding Natural Beauty (ANOB). This ANOB was designated in 1970 in recognition of the important range of natural habitats and species contained within the region. The estuary is specially protected because of its national and international importance for wildlife, many thousands of wintering waders and wildfowl depend on the food and habitat provided there. Among the sea lavender and common reed can be found redshank, lapwing, knot, curlew, dunlin, avocet, grey plover and many more birds who favour the salt marshes.