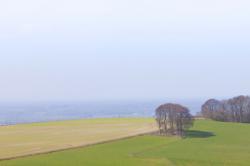 The Vale of Belvoir is and Area of Outstanding Natural Beauty that runs along the border between Leicestershire, Nottinghamshire and parts of Lincolnshire. It is an ill-defined area that is usually identified as being the low and wide valley that occupies the area that lies between Newark on Trent , Melton Mowbray , Ratcliffe on Trent and Grantham .

The village of Belvoir , which derives its name from the French for beautiful view, is situated on the south-eastern slopes of the valley. Belvoir Castle , the ancestral home of the Dukes of Rutland, dominates the Vale. The castle is open to the public and is a very popular tourist attraction. The castle puts on a range of events throughout the year, including the Mothering Sunday Lunch served in the famous Stewards Restaurant. At the other end of the scale are the re-enactments regularly held in the castle grounds, such as those re-enacting the Napoleonic Wars, complete with colour and canon fire! The castle is a popular location for those wishing to wed in style and can also be booked for corporate events.

Melton Mowbray is considered by some to be the home of the pork-pie , while Stilton is famous for its cheese, often referred to as the King of Cheeses. Both products are still made locally although there is only one dairy in the area still making genuine Stilton according to the terms of its protected status.

The vale is popular with walkers who can enjoy the beautiful views the French noticed when they came here as conquerers after 1066. Cycling and horse riding also allow one to enjoy the views and the tranquility afforded by the countryside of the vale. There are organised bike rides for charity that take place in the Vale. The British Heart Foundations first Vale of Belvoir Bike Ride in 2008 was a great success and now seems to be established as an annual event. The ride starts and finishes at Belvoir Castle and passes through Hose, Branston and Denton. Entrants are encouraged to collect as much sponsorship as possible to assist the British Heart Foundation charity.

Although not considered a major area for tourism, the Vale is very well served with accommodation for the visitor. There are a number of luxury hotels in the region as well as the more modest hotel offerings. Holiday cottages are also a popular choice for those wishing to spend some time exploring the Vale