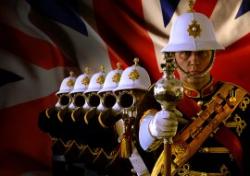 The Massed Bands of the Royal Marines will perform their world-renowned Beating Retreat ceremony on London's Horse Guards Parade in celebration of the birthday of their Captain General, His Royal Highness Prince Phillip, Duke of Edinburgh on 9th, 10th and 11th June at 6.15 pm.

Only performed every three years, this magnificent pageant of military music, precision drill and colour dates back to the 16th century and is regarded as a piece of living history.

More Events in London in May

Ceremony of the keys, Tower of London, EC3