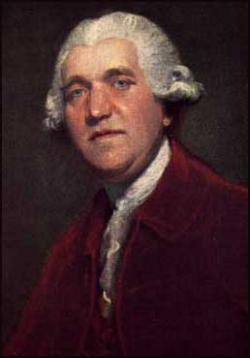 Josiah Wedgwood, associated forever with the pottery that bears his name, was one of the greatest products of his age: an innovator in many fields; and a leading social activist.
Born in Burslem, Staffordshire, the twelfth and youngest child in a family of craft potters, Wedgwood was disabled by smallpox, a disease which weakened his right leg (eventually amputated in 1768). Initially apprenticed to an older brother, Josiah then worked with highly reputed Thomas Whieldon. His disability prevented him operating potters wheels, so he turned to design and development, especially of glazes: he patented the cream Queen Ware; opened a series of factories, culminating in the Etruria Works where he divided tasks to increase production, and provided decent housing for his workforce; developed Jasperware and basalt pots. Above all his work was of top quality (he smashed any with flaws).
His genius extended further: Wedgwood was a mover in building the Trent-Mersey Canal to transport his delicate wares, and deliver raw materials like Cornish clay. He developed an accurate pyrometer to measure kiln temperatures, for which he was elected to the Royal Society. In marketing he introduced mail-shots and catalogues with beautiful illustrations, built a travelling sales-force, and even offered money-back guarantees!
Wedgwood had a social conscience too, an active anti-slavery campaigner, a political reformer friend to the likes of Joseph Priestley, and a leading voice calling for expansion of the suffrage.
He died in 1795, but his genes contributed to British life long afterwards: Charles Darwin was his grandson; Ralph Vaughan Williams a later descendent.

Contributors: Do you have a site related to Josiah Wedgwood?
Supply some content for this page and we will gladly add a link to your site. Email here.