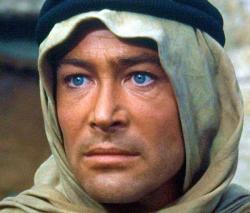 'I have no intention of utterin'... More

Peter Seamus O'Toole was born on 2nd August 1932 either in Connemara, Ireland or Leeds, Yorkshire. O'Toole himself is not certain of his birthplace or date. In his autobiography he accepts 2nd August as his birthdate, but has conflicting birth certificates, with the Irish one giving a June, 1932 birthdate. He is the son of an Irish bookmaker and a Scottish nurse. When Peter was one year old, the OíTooles began a five-year tour of major racetrack towns in Northern England. Peter O'Toole went to a Catholic School for seven or eight years, where he was "implored" to become right-handed and lived in fear of the nuns. O'Toole attended RADA between 1952 and 1954 where his fellow classmates included actors Alan Bates and Albert Finney. O'Toole began working in the theatre, gaining recognition as a Shakespearian actor at the Bristol Old Vic. His major break came when he was chosen to play T.E. Lawrence in David Lean's 'Lawrence of Arabia' in 1962. In 1960 he married Welsh actress, Sian Philips, with whom he has two daughters. The couple divorced in 1979. O'Toole had a son, Lorcan, with model Karen Brown in 1983, born when Peter was in his fifties. Both his daughter Kate and his son are actors. Severe illness almost ended his life in the late 1970s, due to his hell raising lifestyle and heavy drinking. He underwent extensive abdominal surgery, resulting in insulin dependent diabetes. He famously allowed art to imitate life when he played in 'Jeffrey Bernard is Unwell' in various West End theatre runs. He has resided in Clifton, County Galway, Ireland since 1963. O'Toole has written two books. 'Loitering With Intent: The Child', chronicles his childhood in the years leading up to World War II. His second, 'Loitering With Intent: The Apprentice', is about his years spent training at RADA. Both books have been critically acclaimed. O'Toole has been nominated eight times for the Academy Award for Best Actor in a Leading Role, making him the most-nominated actor never to win the award. The nominations were
for: 'Lawrence of Arabia' in 1962, 'Becket' in 1964, 'The Lion in Winter' in 1968, 'Goodbye Mr Chips' in 1969, 'The Ruling Class' in 1972, 'The Stunt Man' in 1980, 'My Favourite Year' in 1982, and 'Venus' in 2006. O'Toole is also one of a handful of actors to be Oscar-nominated for playing the same role in two different films; he played King Henry II in 'Becket' and also in 'The Lion In Winter'. In 2003, the Academy honoured him with an Honorary Oscar. He is a keen rugby and cricket fan, and is a qualified cricket coach. He also supports Sunderland Athletic Football Club.

Contributors: Do you have a site related to Peter OToole?
Supply some content for this page and we will gladly add a link to your site. Email here.