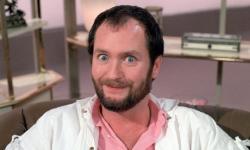 Born in Seaforth, Merseyside
Born on 25th of December 1944
Died in Kensington, London
Died on 4th of April 1995

After early training for the priesthood, a role for which few have been less suited, Kenny Everett became a pirate radio DJ with Radio London and then Radio Luxembourg, before being snapped up by the BBC for Radio 1 (they had actually offered him a job on the Light Programme back in 1962). His radio shows were zany, Everett playing odd characters, using some extremely clever jingles, and being very un-BBC. He was relegated to local BBC stations for a time, was reinstated on Radio 1, and then went to work for Capital Radio. He migrated to TV, working on shows for ITV and the BBC in a similar style to his radio programmes, though pushing the boundaries further: as one of his catch-phrases had it, it was all done in the best possible taste.

Contributors: Do you have a site related to Kenny Everett?
Supply some content for this page and we will gladly add a link to your site. Email here.