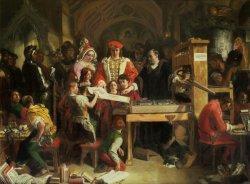 Caxton, the first English printer and a great translator i his own right, was born in Kent, possibly Hadlow, sometime between 1415 and 1422. His family, presumed to be minor landowners, secured the teenage William an apprenticeship in London with Robert Large, an important cloth merchant and sometime head of the Mercers Guild.
Bruges became Caxtons home for many years from 1446, the city one of the great trading centres of Europe, especially for cloth and wool. Caxton rose to be Governor of the English merchant community there, a role which saw him involved in diplomacy as well as trade. During this time he mixed with Margaret of Burgundy, who became one of his patrons later, and Edward IV when the latter was briefly exiled from England.
The vagaries of English politics at this period of dynastic conflict meant Caxton, no longer merchant Governor, had to leave Bruges for Cologne in the late 1460s or early 1470s. It was in Cologne that he became acquainted with the printing technology developed in Mainz and Strasbourg in the previous decades. The merchant Caxton saw an opportunity, and perhaps was equally interested in promulgating literature as he was a man of letters as seen by his many translations for his own press.
In Cologne Caxton printed an encyclopaedia in Latin, the first publication he organised; back in Bruges he produced the first book printed in English, a translation (by him) of the legends of Troy. And then in 1476 he turned up in London, with his press in Westminster Abbeys precincts manned by skilled Flemish immigrants brought with him. His first book printed on English soil was probably Chaucers Canterbury Tales, though it may have been a book on philosophers translated by the Kings brother-in-law Earl Rivers.
Caxtons press was very successful, printing mainly English works, with some too in French and Latin. He sold to the upper classes, and to the clergy  in the latter case indulgences as well as service books and the lives of saints, and enjoyed noble patronage. Like the experienced merchant he was Caxton also exported some books, and imported others  he in effect founded the first publishing company not just the first printing press in England. He died in London in  it is thought  1492, with some 100 different volumes by then circulating in printed form thanks to him.

Contributors: Do you have a site related to William Caxton?
Supply some content for this page and we will gladly add a link to your site. Email here.