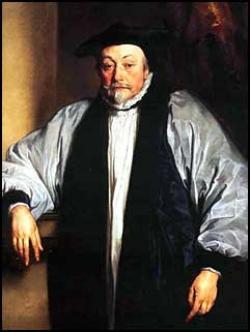 Born in Reading, Berkshire
Born on 7th of October 1573
Died in Tower Hill, London
Died on 10th of January 1645

William Laud was Archbishop of Canterbury in the turbulent times leading seemingly inexorably to the English Civil War. A toxic combination of politics, power and religion led to his downfall and execution. The contemporary punster who coined the saying: Give praise to the Lord and little Laud to the devil, proved prophetic.

William Laud was born in Reading on October 7, 1573. His father was a cloth merchant, a fact he was secretive about as he rose to prominence. Gaining a scholarship from Reading School he attended St Johns College Oxford and was ordained in 1601. As a priest his intellectual and organisational strengths combined with an acceptable nod towards Catholicism enabled him to progress through the hierarchy of the Church of England. In 1611 he was made President of his Oxford College, then Archdeacon of Huntingdon in 1615. His inexorable rise continued as Laud was made Bishop of St Davids in 1622, Bishop of Bath and Wells in 1626 and Bishop of London in 1628, finally attaining the highest position possible in the Anglican Church when he was appointed Archbishop of Canterbury in 1633.

Threatened with the Counter Reformation, however, Puritan elements in the Church of England found Lauds high church policy deeply suspect. For his part Laud was not open to compromise and his wish to impose uniformity on the church led to opposition and reprisals against perceived deviants. These included Presbyterians in Scotland, and action against them led to the Bishops Wars in 1639 and 1640. This was a step too far: Laud was accused of treason and imprisoned in the Tower of London where he remained during the early part of the English Civil War. His fate was sealed when Parliament passed a bill stripping him of his privileges. Laud was beheaded on Tower Hill on January 10, 1645.

Contributors: Do you have a site related to William Laud?
Supply some content for this page and we will gladly add a link to your site. Email here.