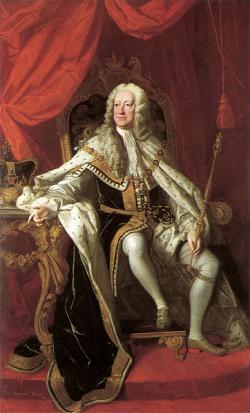 George II was born in 1683 in Hanover Germany, he was the only son of George I, and Sophia Dorothea of Celle, who was the grand daughter of James I. He spent most of his youth in the Hanoverian Court, and later married Margravine Caroline Of Brandenburg - Ansbach on 22nd August 1705. They were extremely happy with each other, and shared a common interest in Music, their union bore seven children, the eldest son was Frederick, William, Anne, Amelia, Caroline, Mary and Louisa. George's relationship with his father was not a happy one, and much conflict arose between the two, with many arguments and disagreements, in fact a dispute occurred with George's choice of godfather in the Duke Of Newcastle, when his son was born in 1717. This argument resulted in him being banished by his father from St James Palace, and all public ceremonies. George gathered his father's opponents close to him at his home Leicester House in London.

However, his father died in 1727 and George ascended to the throne, he was crowned on the 4th October in Westminster Abbey. He continued to leave much of the day to running of Government in the hands of Sir Robert Walpole, just as his father had done, although he had been tempted to appoint another, but his wife persuaded him to keep Sir Robert in his role.

George's reign saw the foundations of the Industrial Revolution being laid with the growth and increase of the production of coal and ship building, he also became the last British Monarch to fight alongside his troops on the battle field, when he commanded his army at the Battle Of Dettingen in Germany at the age of sixty, where victory against the French occurred in 1743. In 1745 the Jacobite Rebellion occurred with Charles Stuart 'The Old pretender' who landed in Scotland in a bid for the throne. They marched into England, but lacking the support needed they were forced to return back to Scotland. George's army were hot on their tails with his son William leading them, a bloody battle ensued on Culloden Moor on April 16th 1746, 'Bonnie Prince Charlie' suffered defeat and fled to the safety of the Highlands.

George II died in 1760 at Kensington Palace, and he was later buried at Westminster Abbey, as his eldest son Frederick had died before him, his grandson was to succeed him, and rule as George III

Contributors: Do you have a site related to George II?
Supply some content for this page and we will gladly add a link to your site. Email here.