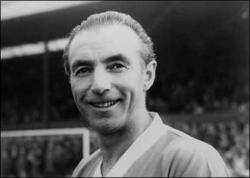 Stanley Matthews is a famous English football player from the bygone era of the game. He was the first footballer to be knighted and, as of 2008, the only player to have been knighted while still playing. He was also the first man to be named European Footballer of the Year and the first Football Writers' Association Footballer of the Year. Matthews was also an inaugural inductee to the English Football Hall of Fame in 2002 to honour his contribution to the English game.

His skills with the ball at his feet led to him being nicknamed 'The Wizard of the Dribble' and 'The Magician'. His career spanned several decades, a feat that is unheard of in the modern game. He was a teetotaller and vegetarian, which must have helped him to kept fit enough to play at the top level until he was 50 years old. Age seemed no obstacle to The Magician who was the oldest player ever to play in England's top football division. He didn't hang up his professional boots until 1970, when he was still playing at professional level in Malta. However, even after this he was still to be seen running down the wing at various exhibition and charity matches. His last recorded game was a charity match held at Grangemouth in 1981.

Matthews was born in humble circumstances in Stoke, England, and had discipline, sportsmanship and self-belief instilled into him at an early age by his boxer father, Jack Matthews. Ever the gentleman, Matthews managed to complete his long career without ever once being booked.

Matthews famously played for Stoke, where his name still enjoys almost God-like status. He also played for Blackpool where he won his only FA Cup winners medal, in 1953. Matthews was capped 54 times for England, scoring 11 goals. His England career is the longest of any player ever, stretching from his debut on September 29, 1934 to his last appearance on May 15, 1957, almost 23 years later. He is also the oldest player to have been capped for England.

Contributors: Do you have a site related to Stanley Matthews?
Supply some content for this page and we will gladly add a link to your site. Email here.