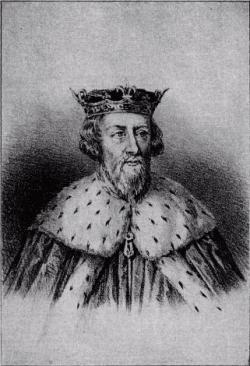 King Alfred (The Great) was born in 849 in Wantage in Berkshire, he was the youngest son of king Ethelwulf of Wessex, and his mother was Osburga. He had been born during turbulent times, the Vikings had landed in 840 through to 843, and launched a series of assaults, gaining Dorset, Lincolnshire, East Anglia, Kent, Canterbury, London, Hampshire and Somerset. At a young age Alfred was taken on a pilgrimedge to Rome, and on their return they found that his father Ethelwulf had been deposed by his son Ethelbald in 856, Alfred's father later died in 858, 3 of Alfred's brothers were to rule the kingdom of Wessex. England had been split into two realms, the south west was ruled by the Saxons, and the North east was ruled by the Vikings.

His brother Ethelred died in 871, and Alfred succeeded him and ascended to the throne. England was invaded by the Danes, who plundered in their thousands, they seized the City of York and set up their kingdom encompassing southern Northumberland, East Anglia and Mercia, their desire to overthrow and seize the Kingdom of Wessex which was ruled over, he amassed troops from Wiltshire, Somerset and Hampshire to defend their realm, they defeated the Danes in 878 at the Battle of Edington.

Alfred was a good scholar, and his love of learning continued, when he was in his thirties he learnt Latin and translated many books into English, he was distraught at the destruction of the education system that had occurred in the Monasteries by the Vikings. It was whilst he rallied troops when he was in the marshes, that he was sheltered by a woman, who unbeknown to her was the King, she scolded him for allowing her cakes to burn, and on finding his true identity apologised, this story has travelled the passages of time and is still remembered.

He formulated a code of laws and was inspirational with his instructions to ensure that English was the official written language of books, he had proved a confident leader of men, together with his military prowess. Alfred was King Of The Anglo Saxons and was the only Monarch to receive the title The Great. He died on the 26th October 899, he was buried at New Minster Abbey at Winchester, he was succeeded by his eldest son Edward the Elder, who ruled as Edward I

Contributors: Do you have a site related to Alfred the Great?
Supply some content for this page and we will gladly add a link to your site. Email here.