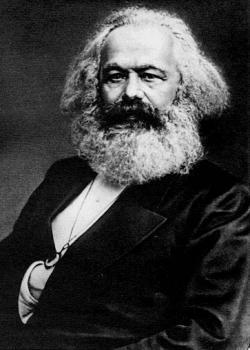 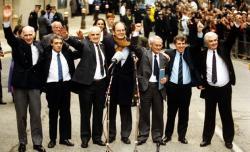 At about a quarter to three on the afternoon of March 14 1883 Karl Marx died, succumbing to the bronchitis and pleurisy that had developed from his chronic catarrh. He was only 64, and though in frail health was still working  he was found dead by his friends at his desk.
Marx was regarded by his adherents and friends as one of the great political theorists , and his legacy bears this out certainly in the power of his thought to motivate men of action like Lenin and Castro. But strangely for the greatest intellectual hero of the left his own life was rather bourgeois: supported by Engels and to a lesser extent by his journalism for the New York Daily Tribune; he married the daughter of a Prussian baron, his wife Jenny who predeceased him by 18 months; and was to a certain extent, in spite of often very low funds, concerned with keeping up appearances, including holidaying in Harrogate  Engels at one time favoured Great Yarmouth . His last home was in Primrose Hill , funded by legacies his wife received, enabling the family to escape poorer accommodation in the capital.
Three days after his death Marx was buried in Highgate Cemetery , his grave a shrine for left-wing thinkers to this day.