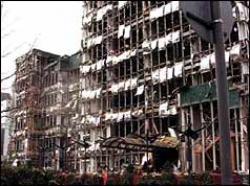 At 19.01 on February 9 1996 a huge explosion was heard throughout London. After 17 months of peace an act of terror had claimed two more lives in the war between the British authorities and the IRA.
For that organization the deaths of two newsagents in the bombing of Canary Wharf were regrettable, blamed by the IRA on police failures after warnings were given in Belfast and Dublin. For Inan Bashir and John Jeffries, and for their loved ones, regrettable was the grossest and most insulting understatement.
The truck-bomb containing half a tonne of explosives ended their lives; hospitalized 39 other victims; destroyed three buildings; and brought operation of the Docklands Light Railway to a halt for weeks. Damage resulting from the explosion was estimated to have cost around £85 million.
At the time of the bombing the IRA was operating a cease-fire, brought to a violent end by the blast. Was the bomb a cynical and grubby ploy within the bigger picture of negotiations, someone sending a reminder to the British government and public of what the IRA could do? The cease-fire was renewed in 1998.