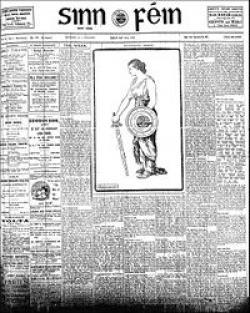 It was in 1905 that a number of radical movements  Fenians, feminists, pacifists, National Council, Inghinidhe na hÉireann, and other Irish political fringe interests  would coalesce under the banner of Sinn Féin.
Formed by Arthur Griffith, the party was a somewhat amorphous coalition, taking its name from the Irish Gaelic we ourselves . In its infancy, it was not the covertly republican party that it would become in the years following the Easter Rising , and latterly the Second World War  the failure of the Home Rule movement was a catalyst for more strident republicanism. And certainly, at that stage it had little or no political affiliation with the IRA  and organisation that would form in the aftermath of the Easter Rising of 1916. Rather Sinn Féins agenda was to gain a cultural and economic independence for Ireland.
This was during a climate of radicalism. The Boer Wars had changed the political climate, and in Ireland, the failed revolt of the Fenian movement in 1867 still carried some resonance. It was Griffith whose ideas were driving Sinn Féin in its infancy; one of the partys early manifestos was to Ireland to have a dual monarchy under the English Crown, parity between the two countries being perhaps an obvious political springboard from which to launch Ireland as an independent state.
Sinn Féin sought sovereignty powers for Ireland. It was all for protective tariffs to boost its ailing economy, and in turn, stem the terminal hemorrhage of emigration. America, Australia, and the British mainland were attracting thousands of Irish people in search of a more
positive future. Sinn Féins radicalism at that time extend to passive resistance: Irish MPs were encouraged to withdraw from Westminster and form a national assembly; and the people of Ireland were encouraged likewise to sponsor such an assembly and ignore the existing legal framework as laid down by the British Crown. Sinn Féin also opposed the draft for the First World War .
As a republican entity, Sinn Féin would transform after the Easter Rising. Radical republicans and nationalists alike would help the party find its voice. On October 1917, it held its first convention, outlining its aims for the international recognition of Ireland as an independent
republic, and then offer the Irish people the chance a referendum to decide how they should be governed.
Griffith would stand aside and Eamon de Valera, the only surviving commandant of the 1916 rising, would head the party. By 1918, Sinn Féin had over 100,000 members, and secured 73 out of 105 Irish seats in the general election of that year.
Sinn Féin was not about to embrace political hegemony; it was more than doubtful that the strength of their mandate would continue. A geographical split emerged  Sinn Féin was strong in the rural south among Catholic lower middle classes; but in the north (in particular, Ulster) their support was weak. These were turbulent times for the party, and especially for Ireland. The Irish Civil War saw the republicans defeated, and in defeat, the IRA sought a vehicle for their political aims. And so became a relationship that would irreversibly change the party, and indeed change the whole dynamic of Irish politics.