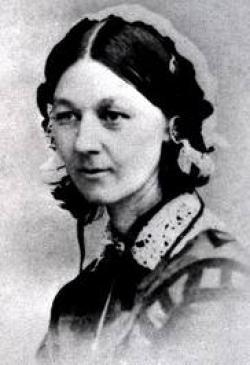 At the great age of 88, Florence Nightingale's contribution to British society was formally recognised when she became the first woman to receive the Order of Merit, an order reserved for those who have excelled in the arts, sciences and intellectual life, founded by Edward VII five years before in 1902.
Almost half a century earlier Miss Nightingale had been elected a member of the Royal Statistical Society, again the first woman to receive that accolade. This was an honour perhaps of lower social standing, but important in that it recognised the technical nature of her work, for she was not only 'The Lady with the Lamp', but a skilled statistician who used her abilities with statistics and in particular with graphic communication of such numbers to great effect in her nursing reforms.
Florence Nightingale was born into a family of immense privilege, her first name chosen as she was born in the eponymous city while her parents were on a two year honeymoon travelling Europe. Her father believed in education for women, and Florence was instructed in mathematics and statistics once her aptitudes in those areas were seen.
Eschewing a conventional life of marriage, though she received several proposals, Florence sought a meaningful goal; her spiritual beliefs seeing her eventually take to what might be described as charitable nursing. When she heard about the appalling conditions in Crimean hospitals during the conflict there she used her influence to establish a nursing contingent and travel to the war zone. Here she saw the terrible conditions suffered by wounded soldiers, and took action to alleviate their suffering. Confronted by the stupidity of British military leaders - they withheld supplies from her group because of its independence and willingness to criticize - she funded much of the work from her own coffers.
Nightingale's own health suffered after the Crimea , and though she lived to the age of 90, dying in 1910, she was bed-ridden after 1896. In spite of this she carried on her work through intermediaries, her efforts bringing about professionalization of nursing, and saving countless lives.