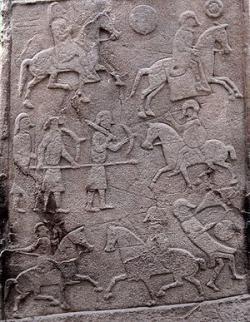 Over six centuries before Robert The Bruce s more celebrated exploits at Bannockburn galvanised Scotlands nationhood and independence, the sodden marsh of Dunnichen Moss, Letham, witnessed a triumph just as important. The Picts victory over the Northumbrian Angles in the Battle Of Nechtansmere resonates today; it secured Scotlands future as a nation.
In neutering the threat from the Northumbrian Angles, the Picts, led by King Bridei Mac Bili, reclaimed control of their territory. An ambitious and expansive race, the Angles were routed. Many who survived were enslaved and their leader, King Ecgfrith, was slain in the battle. The Angles were tricked into believing the Picts mock retreat, and were buried under a hail of stone and spear, as the Pictish army attacked from both sides. The Angles common soldiers, or the fyrd, fell first  they wore only the lightest of armour; leather coats, thin metal helmets. Ecgfriths most-prized warriors fared no better; either perishing at the hands of the Picts or drowning in the lochan while retreating.
This was a most climactic engagement; it defined history amid a backdrop of tribal warfare  a relentless pursuit in the Dark Ages. For thirty years the Angles had ploughed their way north into Pictish territory. Post-Nechtansmere they were contained, never advancing north of the Firth Of Forth . Edinburgh and the Lothians  which had fallen after the Gododdins were defeated in 638AD  was claimed by the Picts. The area would retain Anglian influences to this day  Dun Edin would be called Edinburgh .
7th century borders were malleable, squabbled over as tribal factions of the country would raid one anothers territories. This intensified after the Romans withdrew in about 410AD; repelling the Romans was the only interest the peoples of Scotland shared, when they left, fighting each other passed the time of day. The Picts offered the fiercest resistance to the Roman Empire. With faces painted blue with the crushed leaves of the woad plant, the Picts sporadically raided Roman positions.

They were an indomitable celtic people; the Pictish army that faced Ecgfriths men was widely regarded as a confederacy of Pictish tribes, fighting under one ruler  the idea of nationhood was still young. The Pictish territory spanned the expanse from Inverness in the north, down to the River Forth It was the Romans who named the Picts; from Picti, meaning painted, or tattooed. And these painted warriors were the most predominant of Scotlands early inhabitants.
There are no official chronicles of the battle  this is perhaps why Nechtansmere is overshadowed by the First War of Scottish Independence. Perhaps the only accounts of the battle were on Pictish stone carvings. Buried by history, the forgotten battle; Nechtansmere, nevertheless, seeded the flower of Scotland.

From John Wilce on 12th November 2012
"PICTS" were "BRITS" cf. Welsh "PRITO" = a Briton with Roman "PICTI", a typical Latinization of a Brythonic name, by confusion of Celtic P-R-I-T with Latin P-I-C-T The Pictish Language was no mystery. It was not Irish Gaelic nor Germanic but simply a dialect of Ancient Welsh spoken throughout the island of Britain cf. Pictish ABERDEEN, which is: Welsh ABER = "river mouth" + Welsh river name DEE < Goddess DEVA cf. Pictish PERTH, which is: Welsh PERTH = "hedge, bush, brush" cf. Pictish BEN with Welsh PEN "peak" etc etc etc etc Most Scotish place-names are now either, ANGLO-SCOTS (from German invaders called Saxons) or SCOTTISH-GAELIC (from Irish invaders called Scots) Many of these are simply translations from the original Welsh. The native British population arrived from the Bay of Biscay 10,000 years ago. By the Roman Invasion, they were all BRITONS, either Calidonians in Free Britain,to the north of the Clyde-Forth Isthmus or Roman-Britons (later Strathclyde Welsh) to the south of British Strongholds like DUMBARTON "hill-fort of the Britons" GLASGOW "green vale" DIN EDIN "hill-fort of Edin" & including CUMBRIA "land of the Welsh" When the GAELS acquired PICTLAND and STRATHCYDE by marriage, the original new National Name was British ALBA Sadly, history is written by the winners and Scotland (Irish "Scot" + English "land")replaced British ALBION "world" I do hope that whether independent of Wales or not, future Scots will be taught the true nature of their long history which includes later Viking invaders from the North and Norman-French invaders from the south, in addition to earlier Scots and Saxon invaders and the native Picts AND Welsh, collectively called "BRITONS". When Scots invented "GREAT BRITAIN" they reflected the best balance of our six nations. I hope this continues. NECHTANSMERE is Anglo-Saxon "lake of Nechtan" DUN NECHTAIN is Gaelic "stronghold of Nechtain" LINN GARAN "lake of cranes" is Welsh AND probably also Pictish. The victories of the Picts & Strathclyde Welsh over Roman and Saxon invaders deserve memory, because they caused Hadrian's Wall and resulted in Scotland. Just as the victories of Gwynedd and Powys over Northumbria and Mercia caused Offa's Dyke and resulted in Wales. Always remember that we are ALL Britons from the Bay of Biscay, either Basques from the Pyranees or Celts from Aquitaine or both. In 70 years, I have only met one person who told me that she is a "Pict". I am the only person I know who calls himself a "BRITON".......So sad! No Englishman understands that Welsh GWLAD means "Homeland" and gave "WALES" to English speakers; that CORNWALL means "the horn of Wales" or that CUMBRIA means "land of the Cymry (Welsh)" which once extended from Liverpool to Dumbarton. Why not? Regards, John Wilce Regards, John Wilce (Briton)