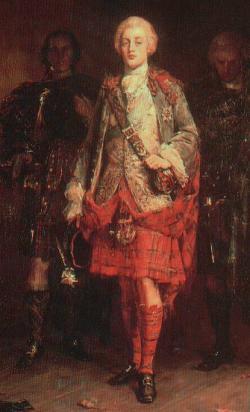 Bonnie Prince Charlie s Jacobite rebellion of 1745 began with a whisper. Arriving on Scottish shores with the intention of restoring the Stuart dynasty to the throne of Scotland and England, he had barely a dozen men to call upon.
The mooted French invasion never materialised. For Charles Edward Stuart, the campaign trail began on Highland soil. The craggy wilds of the Scottish Highlands housed the clans that would gather under his fathers standard. They would wear the white cockade, the Jacobite emblem, and they would unite in uprising against King George II . Whatever differences had been nurtured between the Highland clans, they would be assuaged by their common wish to overthrow the Hanoverian rule that had blighted much of Scotland. Memories of the massacre at Glencoe were still fresh.
Just south of Arisaig , Charles made Borrodale House his headquarters. It was an open house, the epicentre of the Jacobite rising. Charles would need to harvest and groom the locals dissent. He had a cause; but he had yet to recruit an army. Scotland had never fully accepted the Glorious Revolution . Certainly, Presbyterian interests were being tended to, but the economic hardships that followed would be allied to the affection still felt for the Stuart Kings. Scotland, indeed Britain, was entering a crucial phase in the formation of government.
Charles appealed for loyalty from the chieftains sympathetic to Jacobitism. In the Highlands, the political climate was ripe for rebellion. The rather savage disposition of the Highlanders unnerved the occupying Hanoverians. After the Jacobite rising of 1715, London had deployed a huge military presence north of the border  a tactic used to suppress by force the latent Jacobite threat  but certain vignettes of rebellion created the impression that this military oppression did not quite have an iron hand in the wilds of the Scottish Highlands. The governor of Fort Augustus would send reinforcements who wilted at the sight of Cameron clansmen, surrendering almost at once. There was a sense that though the Highlander could be contained; he was, to an extent, ungovernable.
Despite this, Charles campaign needed an iconic statement, a spectacular declaration of intent. If this was to be the epoch of Jacobite rebellion, there had to be an act of great symbolism. Spreading the word to clans far and wide in the Highlands, on the 19th August, 1745, Charles would raise the Stuart standard at Glenfinann.

This was the defining moment in Charles' campaign. Before the Clanranald Macdonalds, and the massed ranks of the Clan Cameron, complete with their Hanoverian prisoners and the rousing skirl of pipes, Charles and the Duke Of Atholl unfurled the standard. The Jacobite manifesto was met with the resounding support of the Highland clans. At the head of Loch Sheil, the valley echoed with the sound of rebellion