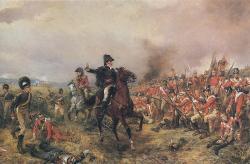 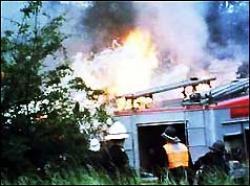 The last and perhaps greatest battle of the Napoleonic Wars took place on the 18th June 1815, near the Belgian village of Waterloo.

Bonaparte had landed in France on March 1st, returning from exile on Elba. By the end of May he had 500,000 men ready, had requisitioned supplies and bullied money from bankers to satisfy their needs, and was prepared to fight the inevitable war against the allies who wanted rid of him again.

Facing him was Wellington , in Brussels since April 5, desperately trying to reinvigorate and manage the armies run down since Napoleons defeat in 1814.
The armies at Waterloo were soaked by rainstorms the previous night, hungry, tired from marching, and tightly packed into a narrow battleground where through the day the smoke of musket, cannon and even Captain Whinyates rockets truly became the fog of war.

The British with German, Dutch and Belgian allies numbered some 73,000, the French perhaps 4,000 more. The arrival of Bluchers Prussians in the late afternoon, just under 50,000 fresh troops, tipped the scales in what Wellington called a damned close run thing.

The chateau of Hougoumont and its orchards was the epicentre of the battle, the scene of many acts of heroism and gallantry: Macdonnell holding firm in spite of fire raging through some buildings; Sous-Lieutenant Legros and his 30 men forcing their way into the compound, all bar a drummer-boy cut down by the defenders in minutes.

By the end of the 18th the British and allies had lost 17,000 men, the Prussians 7,000, and the French an estimated 30,000. Napoleon fled to Paris, then tried to take ship to America but was captured and exiled again, this time for good, to distant St Helena.

From bob on 21st February 2013
i have seen that painting before:)