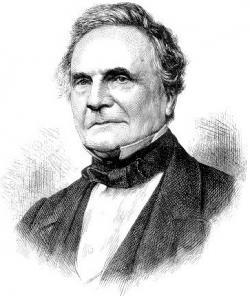 Britain has played a significant role in the development of the computer and what it can do, with pioneers including Alan Turing, Clive Sinclair, Tim Berners-Lee , and the perhaps less well-know Freddie Williams and Tom Kilburn (who created the first working computer program in 1948 in Manchester). The grand-daddy of them all, however, was Charles Babbage, born in 1791.
Charles Babbage was a gifted mathematician who studied at Cambridge. Independently wealthy he was able to pursue his engineering and mathematical interests after his university studies. Faults in logarithm tables gave him the idea of the need for mechanical computation and printing of results  the errors more likely down to the printers than those who did the calculations known then as the computers.
His solution to the problem was his Difference Engine, proposed to The Royal Astronomical Society on June 14 1822. The following year the government, keen to have error-free and cheaper tables, began providing funds to realise the project. Sadly though not only was the Difference Engine the prototype of modern automatic computing methods, it was also the prototype of government computing projects. Eventually, having spent £17000 on the work, the government pulled the plug, or the mechanical equivalent. No difference engine had then been completed.
In 1991, however, the Science Museum in London did complete the construction of a Difference Engine, with only minor corrections to Babbages plans, and working to engineering tolerances that 19th century craftsmen could have managed. It functioned very well, and is now on display in the museum.