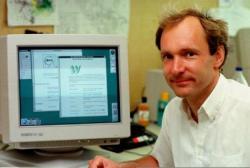 The future inventor of the World Wide Web, Tim Berners-Lee, was born on June 8 1955 in London, the city where he attended Emanuel School from which he won a place at The Queens College Oxford. There he took a first in Physics, graduating in 1976.
It was Berners-Lees work at CERN that provided the space for his development of ideas that eventually led to the creation of the web. His first spell at the site was the second half of 1980, during which he first suggested using hypertext, though initially his concept was limited to improving information sharing between researchers at CERN. In 1984 he became a fellow at CERN.
The idea of using hypertext to facilitate information availability on the existing internet was first proposed formally in March 1989, the project refined with help from his colleague Robert Cailliau was approved the following year: but it took until August 6 1991 for the first website to be made operational. With laudable benevolence Berners-Lee refused to patent the idea.
Since 2004 Berners-Lee has held a chair at Southampton University. He is working there on the Semantic Web, planned to facilitate the reading of data by machines thus speeding the collation and use of such information.
Recognition of the importance of his work, and his philanthropic decision not to patent it, has come in many forms: he was knighted in 2004; joined the far more exclusive Order of Merit in 2007; and has been granted honorary doctorates from The Open University and Lancaster University among others.

Contributors: Do you have a site related to Tim Berners-Lee?
Supply some content for this page and we will gladly add a link to your site. Email here.