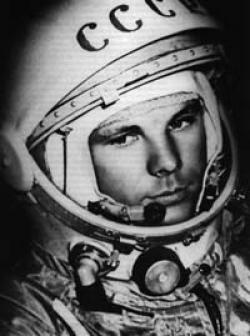 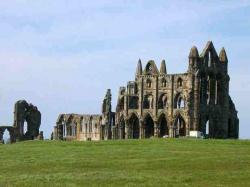 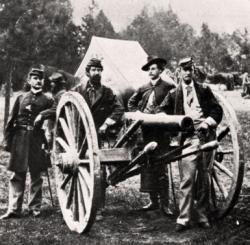 The Space Race really was a contest; and the first few rounds went to the USSR: the launch of Sputnik in 1957 was a blow to American prestige; within a month of that launch the Soviets had a dog in space before the USA could even launch its first satellite, Explorer. And on April 12 1961 the Russian pilot Yuri Gagarin became the first man to travel beyond the earths atmosphere and orbit the planet, three weeks before Alan Shepard became the first American in space.
President Kennedy congratulated the Soviet Union for Gagarins milestone achievement, but like a consummate politician on May 25 1961 he changed the rules of the game: the real winner now would be the first to land a man on the moon , which he pledged America would do before the end of the decade. Neil Armstrong duly set foot on the moon on July 21 1969.
Gagarin, a one-time foundry worker who learned to fly as a hobby, was possibly selected for the honour because his stature  he was just 5 2 tall  suited the cramped Vostok capsule. But he was also a capable pilot, very fit, and with a collective farm upbringing a propaganda gift to the Russians. He was also remarkably personable, soon after his flight making PR trips across the globe: between July 11 and 15 1961 he was in Britain, visiting Karl Marx s grave in Highgate Cemetery ; attending an Earls Court exhibition and a Royal Society presentation; and braving the rain in Manchester . Tragically  and for some suspiciously  he died in a plane crash in 1968.