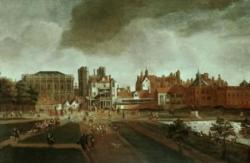 The Palace of Westminster , of which today only the Banqueting Hall now remains, was once the home of Cardinal Wolsey ; then when his star fell it became Henry VIII s property. James I developed what had evolved into a complex  he commissioned Inigo Jones to add the magnificent Banqueting Hall in which the grandest state receptions could be held. James was the last monarch to live in the place  his son Charles , however, died in front of it - though William and Mary may have considered using the palace as the royal residence again: a fire in one part in 1691 would have made the prospect less attractive.
A greater fire struck seven years later, by which time of course Mary was long dead. It is thought a careless washer-woman left some drying clothes too close to a fire; when they caught light the blaze swept through the older parts: only the Banqueting Hall, the gatehouse and a few outlying buildings were left. With the loss of most of the complex the uses to which the palace could be put were limited, so Christopher Wren was given the task of converting the Banqueting Hall to a chapel, which he did in time for King William to attend a service there on Christmas Day.