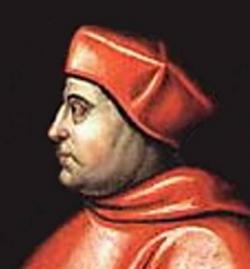 Born in Ipswich, Suffolk
Born in 1473
Died in Leicester, Leicestershire
Died on 29th of November 1530

Wolsey was born in Ipswich in 1475 with his family coming from the merchant class  his father a wealthy butcher and cattle farmer - from which Thomas was to escape through his intelligence and industry. He studied theology at Magdalen College, Oxford, becoming a fellow there and later master of its seminary. He was ordained in 1498. The priesthood was a path combining both spiritual and secular advancement for him. By 1507 Wolsey was in the service of Henry VII as his royal chaplain rising to Almoner with a seat on the Privy Council by 1509.

When Henry VIII came to the throne he left much of the details of government to the capable Wolsey so he could concentrate on serious pursuits like hunting and womanizing. Clerical posts and their benefits were heaped on the capable administrator: Dean of Lincoln; Canon of Windsor; Dean of York; Bishop of Lincoln; Archbishop of York in 1514; and a Cardinals hat in 1515.

Wolsey continued his inexorable and profitable rise, organizing the army for war with France and then arranging the highest level diplomatic meetings and brokering treaties. He was Lord Chancellor by 1515 and arranged the meeting between Henry VII and Francis I of France on The Field of the Cloth of Gold within the English enclave around Calais. At the peak of his power he was Henrys confident and alter rex, the king in Henrys place, grown arrogant and exceedingly rich.

In 1533 Henry VIIIs driving need for a son and heir led to him seeking a divorce from Catherine of Aragon. Wolsey was unable to sway the Pope in Henrys favour. Regarded by courtiers as an upstart and with few allies he was dismissed as Chancellor in October 1529 and forced to leave London for York. Henry had Wolsey arrested on charges of treason and ordered he be brought to London for trial. Wolsey escaped inevitable execution by dying of natural causes en route in Leicester on November 29, 1530. Today Wolseys most lasting monument is the grand palace of Hampton Court which he constructed for himself and his vast retinue of servants.

Contributors: Do you have a site related to Cardinal Wolsey?
Supply some content for this page and we will gladly add a link to your site. Email here.