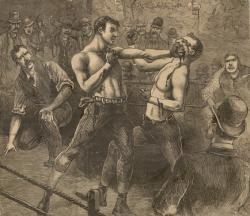 The ruination of Oscar Wilde ; atheist peer; probable blackmailer; and one of the motivational forces behind the cleaning up of the sport of boxing: the Marquess of Queensbury was a complex and fascinating character too often demonised because of his quarrel with the great Anglo-Irish playwright and poet.

The Marquess helped found the Amateur Athletic Club in 1866, and in 1867 the rules that club used for boxing were drawn up in his name, though he did not actually pen them.
In 1890 the first world boxing championship held according to those rules took place at the Pelican Club (made famous by P.G. Wodehouse via his character Galahad Threepwood) in Sohos Gerrard Street. This bout is also notable as the first where a black boxer  in this case George Dixon of Canada  won an official world title, defeating Edwin Wallace of England in 18 rounds to take the Bantamweight crown and a purse of £500, the fight lasting well over 100 minutes. The two boxers went on to fight exhibition matches all over the country, taking in Barrow , Derby , Sheffield , Leeds and Bradford .