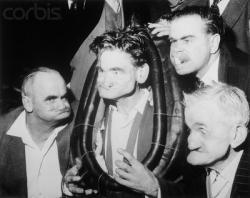 Think Compo on a bad day, or Ena Sharples in a mood, and you are getting the picture, albeit a PG version of the full freak-face show that is the World Gurning Championships held every September in Egremont near Whitehaven. Contestants put their heads through a horse-collar, known locally as a braffin, and pull the most hideous faces they can, the winner of the contest decided by the applause of the huge audience.
The Championships are part of the ancient Crab Fair in the village of Egremont , first held in 1267 when Henry III granted a charter to hold a three-day fair to Thomas de Multon, Lord of Egremont. This event was held when rents were to be paid to the Lord of the Manor, one of the characteristic products available to the peasants at the time being the crab apple, coinciding with harvest time when goods would be available and there was reason to celebrate.
Many traditions remain at the fair, though the date has changed over the years and the event is reduced from three days to the third Saturday in September. There is climbing the greasy pole to grab the prize atop it, hound trailing (following a scent trail), fell racing, and an apple cart parade when apples (though these days they are sweet rather than crab apples) are lobbed to the crowds. The cock fighting and bear baiting once featured were outlawed before Victoria became Queen.
But the biggest draw is the gurning, or face pulling (gurn and grin are thought to be from a similar root). For centuries this was done in a contest at which tobacco was the prize. But today it is for the honour of being world champion. Gordon Mattinson from Aspatria is thought to be the only man ever to hold that honour 10 times  the Steve Redgrave of gurning.
Various suggestions have been made about the origin of the event. Some think it is a survival of the horrific taunting of village idiots. One local legend has a farmer returning home to a nagging wife and throwing a horse-collar over her head. Or it just might be that this antithesis of beauty contests came out of a wager. Whatever the truth, gurning is a strangely compelling event, when the toothless and the slack fleshed can come into their own in a world of folded faces and ghastly grins.