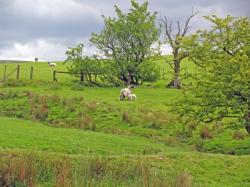 Though the Yorkshire village of Haworth springs to mind when the Brontes are mentioned, they did in fact have some very important links with sites in Lancashire , and for three of them these links were to prove fateful  fatal even.
Haworth is just over the border from parts of East Lancashire, so it is not surprising that the sisters were familiar with, for example, the beauty spot of Wycoller near Burnley , where an ancient pack horse bridge crosses a now usually quiet stream, and the ruins of Wycoller Hall stand amid the sturdy trees. Wycoller Hall is said by several experts to be the model for Ferndean Manor in Jane Eyre. Rather more creative locals have been known to claim that the hills around the site were the real Wuthering Heights.
A second location not far from Wycoller, the beautiful Jacobean Gawthorpe Hall near Padiham, was of significance to Charlotte Bronte: once her cover  she wrote as Currer Bell  was blown, the socially ambitious Sir James Kay-Shuttleworth, owner of the hall, sought her out as a celebrity neighbour, travelling to Haworth to enrol Charlottes father in his campaign to get the famous author to visit him.
Eventually Charlotte did visit the hall for the first time in 1850, and must have at least savoured the plushness of her temporary surroundings compared to the lowly parsonage in which she and her father resided. The hall was remodelled by Barry and Pugin just as they were working their magic on the new Houses of Parliament, indeed some of the tiles at Gawthorpe are supposedly overs from that project!
Sir James showed her the sights of his district, taking Charlotte to Whalley Abbey and Mitton Hall near Blackburn, though a million miles distant in atmosphere -the ruins of Whalleys Abbey certainly seem suited to the romantic Bronte style. She even travelled with the Kay-Shuttleworths to Windermere .
In the end, however, it was a return visit in January 1855 to the hall that killed her: Charlotte, newly married and already pregnant, was far from well when she arrived, but insisted on taking the air in the fine gardens: she had caught a chill just before arriving, and the cold damp air made it far, far worse  she died in March that year never having regained her strength.
The last Lancashire link is the most fascinating of the lot: it provides a literary what if? For though we are familiar with the novels of Charlotte , Emily , and Anne Bronte , the two eldest daughters Maria and Elizabeth died in childhood  at least partly because of the discomforts they suffered at Clergy Daughters School in Cowan Bridge, north east of Lancaster . Had they not died young would they have written stirringly romantic novels fuelled by repressed sexuality? Would the BBC have been able to produce yet more chest-heavingly fraught dramas?
The two preceded Charlottes and Emilys arrivals at the school, which gave Charlotte plenty of material for Lowood School in Jane Eyre. To be fair to the school none of the Bronte children was strong, and Maria and Elizabeth had both recently suffered measles and other illnesses including whooping cough  their father it appears was far too hasty to get them off his hands. Both caught fevers, and though they were taken back to Yorkshire they never recovered, both dying in June 1825. They had only been at the school since July the previous year.
Two further buildings in the area of Cowan Bridge (the school can be seen from the road through the village, by the bridge, a faint plaque on the gable end nearest the road marking the Bronte association) are well worth a visit: the younger girls while at the school would have worshipped at Leck Church, up a winding lane about a mile from the school; it is an elegant building in green surroundings that seem far removed from the general Bronte experience; likewise the church at Tunstall, perhaps four miles distant over the fields or along the lanes, where the elder girls probably walked on a Sunday as the schools founder preached there, just as the vile Brocklehurst preached at Brocklebridge.
A tour round the Lancashire locations known to the Brontes expands knowledge of their lives, but more rewardingly still it gives those who know little of Lancashires many sided beauty the chance to see the greener side of what is still an agricultural county for all its industrial fame; its history in Whalley, Mitton and Gawthorpe; and something of its at times faded grandeur at Wycoller.