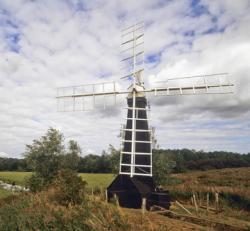 Dorothy L. Sayers, the most literary of the Golden Age crime novelists, spent much of her life in the strangely eerie fenland countryside. She set what is arguably her greatest novel, The Nine Tailors, in the area, exploiting its unique landscape to give the work its atmosphere.
The fens are an area spanning parts of East Cambridgeshire and West Norfolk , much of which in earlier days was under water. Drainage work was done as early as Roman times, and was much accelerated in the Stuart period when Gentleman Adventurers - the venture capitalists of the day - undertook the digging of dykes and cuts to create new agricultural land. The relative newness of the farmland is one of the reasons for its chessboard aspect - referred to in the novel as "a crazy quilt."
For the best way to travel back to the fens of the Wimsey era a visit to Wicken Fen National Nature Reserve is well worthwhile. This is run by the National Trust, preserving the wildlife and the droves and grass paths.
The Sayers family moved in 1897 to Bluntisham, in Cambridgeshire, when she was just four years old. Her father was rector there until he moved within the fens to Christchurch. Dorothy's father and mother both died and were buried in the parish, their previously unmarked grave now marked with a stone because of their daughter's fame.
In Bluntisham the family lived in the Old Rectory, a substantial Georgian building which undoubtedly provided part of the inspiration for the rectory inhabited by Theodore Venables and his wife in The Nine Tailors, though the rectory at Christchurch was equally grand, an ivy covered and graceful pile surrounded by trees, not the most common commodity in the fens. The bell ringing that is so central to the plot and the construction of the book similarly may have had its inspiration in her father's work to rehabilitate the bells at Bluntisham Church in about 1910.
Fenchurch in The Nine Tailors is not a real place, and the church Sayers described so beautifully does not exist in itself, but there are two in the region that obviously provided models for certain aspects of St Paul's Fenchurch: St Wendreda's in March; and St Peter's in Upwell.
"Why, it's like a young Cathedral," says Lord Peter the first time he views St Paul's in the book. Later he enters it for the first time: "And there, mounting to the steep pitch of the roof, his eyes were held entranced with wonder and delight," he sees the magnificent roof: "A dusky shimmer of bright hair and out-spread wings...the ranked angels, cherubim and seraphim, choir over choir, from corbel and hammer-beam floating face to face uplifted." St Wendreda's hammer-beam roof was carved around the turn of the 15th and 16th centuries, an absolute gem, one of the most beautiful church interiors in Europe that should be far better known.
St Peter's in Upwell, just over the border into Norfolk , has galleries not perhaps to the taste of Mrs Venables, but important to the book, and it enjoys an angel roof although somewhat less splendid than the one in March.
The pattern of dykes and ditches and rivers that somehow make the visitor feel more and more distant from the rest of the world with each one crossed offers a chance to escape that world even further, fishing them. The Old Nene and the drains that - generally - keep the waters from rising too far as home to pike and perch and rudd of good size. But take care as you drive the back roads to avoid Lord Peter's fate (he always drives too fast), crossing a humpback bridge at speed and slipping down the ditch beyond it - this, for those who want to reproduce the journey without the outcome, is heading east from March on the B1099, across the 16 foot drain that Sayers transforms into the 30 foot drain in her writing. Once the road passes the Bedlam Bridge it turns sharply left.
In the Nine Tailors the Red Cow public house makes an appearance, though it is not as vital to the story as The Wheatsheaf, and just beyond Bedlam Bridge there is a pub called the Dun Cow. We need contrasts in our life to give it meaning, and a pint of bitter in a fenland pub when it is dank and cold outside is worth ten times more than a bottle of lager in Spain.
Bells are of course central to The Nine Tailors, and the belfry sees not only Lord Peter ringing the changes (15,840 of them) with an assortment of villagers, but also...best not to say in case you haven't read the novel. The belfry may well have been based on the huge church at Terrington St Clement, another Norfolk border outpost.
Further afield yet for those who want to explore deeper into Sayers Country is the town of Witham in Essex , almost due south from Bluntisham and Christchurch, where the library has a major Sayers collection, kept just a step or two from the home Sayers lived in for the latter years of her life, and the statue of her in trademark hat.
The Fens may not seem the most natural place for a break, which is one of the best reasons for going there. The Sayers connection is fascinating for those who love her books, and provides colour for those who barely know them. But the sheer unique strangeness of the scenery and the islands of architectural splendour that are the fabulous fenland churches are even better reasons for making the effort.

2 Responses to Dorothy L Sayers and the Fens

From M Nelson on 18th August 2009
Really helped me visualize The Nine Tailors and the fens. Would love to visit the area someday, especially the churches described.