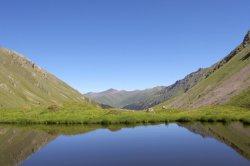 Ardkinglas
Did you know that the tallest tree in Britain is a fir tree in Ardkinglas Woodland Garden measured at 212 feet in 2010? The tree was only planted (as a sapling) in the 25 acres of woodlands of Ardkinglas House in about 1875. It is a Grand Fir (obviously in more ways than one), Abies Grandis.
Campbeltown
Did you know that Campbeltowns Wee Picture House is the oldest continuously-run cinema in Scotland? The waterfront art deco building was purpose-built in 1913. It is now a community-run enterprise. Opened to the public on May 26 1913 it was the creation of architect A.V. Gardner, whose two-tier stalls and balcony design  very unusually these days  still survives, along with its proscenium arch and beautifully quirky atmospheric decor.
Eigg
Did you know that in 1577 the entire population of Eigg, bar one family, was massacred? Macleods and MacDonalds engaged in a long vendetta throughout the medieval era. Macleods from Skye raided Eigg, held by Clan Donald, in 1577 and after much searching eventually found the secret cave with a tiny entrance where the locals were hiding. The Macleods made a smoky fire and asphyxiated 395 of their enemies. Not an event commemorated on shortbread tins.