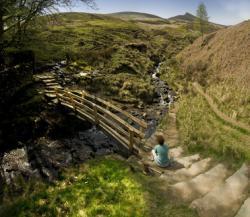 Castle Hotel
"Good Points: nice waiters Bad Points: 1. When we arrived to get our family room, instead of a double-bed and two beds for our 2 daughters, there were only a simple ..." More

Castle Hotel
"Good Points: The breakfast was fantastic-best full English we had had for ages and excellent value. Bad Points: Room was a bit cool although it was way below freezing outside. ..." More

The Upper Eden Medical Practice
"I want to thank Dr. Huck, his nurse and staff for the wonderful care my wife (Joan) received when she fell on the street in the Kirkby Stephen city ..." More

Although these days part of Cumbria, the small market town of Kirkby Stephen was once in Westmoreland, and perhaps in feel belongs most to the Yorkshire Dales close by. Indeed St Stephens church that gives the town its name (Kirk = Church, By = Town) is known as the Cathedral of the Dales. The lovely building dates from the 12th century, with many later additions and renovations, but the most fascinating thing about it is the 9th century Viking stone incorporated in the building. This depicts the suitably horned Norse god Loki, chained after he killed Odins son. The town retains the feel of a place that regularly defended itself against the Scottish raiders who plagued the area between the 13th century and the start of Elizabeth Is reign. There is even a tunnel beneath an alley off the market square, used to shelter non-combatants during attacks. The market square is notable for the remnants of a bull baiting ring  an activity that only ended in 1820 here. The town was granted a market charter in 1361, and still holds markets to this day. Kirkby Stephen is a good base for walking tours in the surrounding fells. It is also the centre point of the 190 mile coast to coast walk, but gentler forays are available too: Swaledale is a short drive away along the B6270. Sights nearby include Pendragon Castle, the ruins of a 12th century castle on the site of Uther Pendragons original fortification. In myth Uther was King Arthurs father. The town, though out of the way, is well served by roads. But perhaps the best way to travel there is by train. Its station, sited outside the town to avoid the line dropping into the Eden Valley, is on the rightly famed Settle-Carlisle line.

Places to Stay near Kirkby Stephen

Situated in the village of Nateby just a mile south of Kirkby Stephen, the Black Bull Inn can be found in the centre of the Village, directly opposite the road ... More

Under new owners and recently re-opened the Bay Horse Inn as returned to a busy village pub. Just a stones throw from the Lake District and Yorkshire Dales National Parks ... More

This family hotel with excellent food enjoys the quiet seclusion and charm of a traditional Westmorland village, with magnificent views of the Norman castle and the surrounding Pennines. Set in rural Cumbria, ... More

The King's Head, Ravenstonedale, is everything a good pub should be: warm, friendly and welcoming both to the local community and to visitors alike. The King's Head is a place to relax and unwind over ... More | visit website
map book

In the beautiful upper Eden Valley, nestling between Appleby and Kirkby Stephen at the foot of the Cumbrian Pennines, these newly built detached timber lodges provide holiday ... More

The Black Swan Hotel is a beautiful victorian hotel in the tranquil conservation village of Ravenstonedale in the stunning Eden valley. Our family run hotel offers a relaxed informal home from ... More | visit website

Brownber Hall is a magnificent country house of unique character built around 1860. Set amid beautiful rolling countryside near the village of Newbiggin-on-Lune in Cumbria, it is only 5 miles from the M6 but is ... More | visit website
map book

deal base for walking or touring - midway between Lakes and Dales. Private nature reserve to rear. Quiet and relaxing with exceptionally good food.