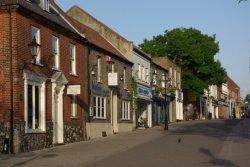 Premier Inn Thetford
"Good Points: We often stay in motels and with the Premier Inns you know what to expect Bad Points: The fire alarm went off twice - once on the Friday night ..." More

Thetford Warren Lodge
"I visited for the first time taking my parents out. My rice dish was hard to the point i left it . My partners food was cold as was my mums. To spend ..." More

Although a relatively small place (the population was a little under 22,000 in 2001) the Breckland market town of Thetford manages somehow to echo much of the history of the entire country. Grimes Graves, the prehistoric flint mines just a few miles to the north west of Thetford, is regarded as the oldest industrial site in Europe. As well as the flint workings the miners left a female figure carved in chalk, and an antler-pick complete with fingerprint, physical links to 5,000 years ago. Thetford Castle Hill is a Norman motte, but is thought to have been an Iron Age hill fort dating from around 250 BC. Another link to the towns past is the Thetford treasure, buried in Roman times, and only unearthed in 1979. Now housed in the British Museum in London, the story of the treasure is told in the Ancient House Museum on White Hart Street in Thetford. Standing on the ancient Icknield Way trade route, Thetford was in the 9th century the capital of the Danish kingdom of East Anglia, one of the four biggest towns in the country, and was a Christian centre of great importance, at one time the See of the Bishops of East Anglia. There are plenty of relics of that era in and around the town, with the gatehouse of the 14th century priory still standing, the ruins of the cloisters of Thetford Priory, and several impressive medieval churches. Thetford declined in importance from the days in the 10th century when it had its own mint, but remained an important coaching town on the London to Norwich route. There have been river crossings and bridges at Thetford for millennia, and its pretty ironwork Thetford Town Bridge was a bottleneck for London to Norwich traffic until as late as the 1970s. Standing on the confluence of the Little Ouse and the Thet, the town even has a three-way bridge. The coaching trade generally means good pubs, and Thetford has several of note. The Bell, built in Tudor times, is a famous coaching inn, complete with ghost  Betty Radcliffe, wronged one time landlady of the establishment. Also of note are the Kings Head, handily next to the Ancient House Museum, and the Dolphin, by Castle Hill, so a tour of the sights need not be without refreshment. The towns most famous son, Thomas Paine, republican, American revolutionary and political visionary, is commemorated by a statue near the Bell Inn, outside (somewhat perversely) the Kings House public buildings. His words My country is the world, is today apposite for Thetford, a town which has seen three waves of immigration in the last 50 years: firstly Londons overspill; then an estimated 6,000 Portuguese in the late 1990s, and most recently perhaps as many Lithuanians, Poles and other East Europeans, bringing a cosmopolitan feel to some of the towns shops, eateries and bars.

Places to Stay near Thetford

Andrew and Caroline Blyth welcome their guests into the warm, friendly atmosphere of the family-run Wereham House.
Wereham House is a charming, bay-fronted Victorian/Georgian house located in Thetford town centre in South-West ... More

The historic Bell in Thetford has a restaurant serving simple English food, a bar with traditional ales, and comfy en suite rooms.

The Bell was originally a seminary, but under Henry VIII's dissolution of the monasteries, ... More | visit website

The Glebe bed and breakfast is situated mid-way between Cambridge and Norwich. This imposing house stands in its own extensive grounds on the A11 at Elveden, 12 minutes from Newmarket, with easy access and ample parking. Snetterton Race ... More | visit website

Whether you wish to enjoy a relaxing drink with the family, a dining experience full of charm, or a comfortable bed, the Elveden Inn with its warm open fires and family-friendly atmosphere is the perfect ... More | visit website
map book

Brandon House has 37 bedrooms including 12 budget rooms. All the rooms are en-suite with spacious bathrooms, remote control satelite televisions, direct al up phone that is modem compatible,tea and ... More

The Six Bells is a perfect country escape set on the edge of the village green, near the duck pond in the pretty Suffolk village of Bardwell. Originating in the late 1500s, ... More

A Grade II listed mansion built in the Jacobean style designed by William Burn and constructed between 1857 and 1862. The property extended to 7,718 acres and was renowned as one ... More

The Crown Hotel Mundford is situated in the heart of Thetford Forest in Norfolk, offering accommodation and fine dining. Our en-suite rooms extend around the main hotel building, all offering their own individual character, with well ... More | visit website
map website

The George and Dragon which sits opposite the market square in the thriving South Norfolk village of East Harling has recently reopened after complete refurbishment. Situated just of the A11 (Thetford 15 minutes, Norwich 20mins) ... More | visit website