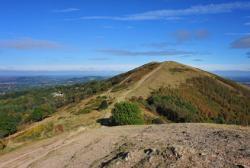 Retired Soldier
"What a great little pub this is, a real gem. We were passing by on a Friday night and popped in for one drink but ended up staying till closing ..." More

Red Lion
"Don't know what the other John was on that day in December. Had a lovely meal, reasonably priced and served wsith a smile. Place was packed with eaters and not a builder ..." More

"During a short break to the pretty town of Malvern in the Malvern Hills, had the dog with us so were taking him for a walk when we stumbled across ..." More

The Malvern Hills are amongst the oldest in England, around 600 million years, they run North/South for about 9 miles (13km) and are made up of mainly of Granite and Gniess with some underlain Red Sandstone, but these bare facts do not convey the beauty and splendour that has attracted countless writers, poets, artists and perhaps Britain's greatest composer, Sir Edward Elgar, from gaining inspiration from its grandeur and spectacular views. As far back as the 14th century William Langland wrote his allegorical poem"Piers Plowman" -describing the life and times of an English Peasant - on the slopes of the Malvern Hills and in the 20th century, J.R.R.Tolkien got inspiration for the "Misty Mountains" ("Lord of the Rings" and "The Hobbit") whilst walking in the hills. Settlement on and around the hills goes back millennia, there are the remains of an Iron Age fort around the Herefordshire Beacon (1109 ft), called "British Camp". The Romans came, saw and conquered, the Anglo Saxons, the Danes and the Normans have all left their mark in the area. From the highest point of the hills, Worcestershire Beacon at 1395 ft (425m), three of Britain's greatest Cathedrals are visible (on a clear day!) Worcester, Hereford and Gloucester as well as views over the Marches into Wales in the west and to the Vale of Evesham and the Cotswolds to the east. But apart from the views and inspirational scenery Malvern is most famous for its the water that is produces from a myriad of springs and wells. It was first mentioned for its healing powers by Bannister in 1622 and the water has been bottled and sent all over the country ever since. It was in the early 19th century when Dr James Gully made the "Water Cure" popular, this was carried on with gusto by the Victorians and when Mr Schweppes presented a bottle of Malvern Water to Queen Victoria at the Great Exhibition of 1851 its popularity was assured. Nestling in the lee of the hills the villages have grown immeasurably since the 1800`s the largest of these is now the town of Great Malvern. 8 miles south west of Worcester and built on the side of the hills Great Malvern developed around the 11th century Priory, the remains now form the Parish Church, the Priory was on land that belonged to Westminster Abbey and this caused friction between the Priory and the Bishops of Worcester. The church was extensively restored in 1860 under the direction of Sir George Gilbert Scott. By the middle of the 19th century many houses, bath houses were built to cater for people "taking the waters", the most popular being at St.Ann`s Well, this has left a legacy of many fine buildings including the listed railway station, a fine example of Victorian railway architecture. Great Malvern is now an educational and cultural centre, with Malvern Collage for Boys and Malvern Girls Collage, now Malvern St.James, being to the for. The Malvern Museum is in the Gateway of a Monastery and houses a collection of local interest as well as a history of Elgar and his works. To the north of Great Malvern lies Malvern Link the two town centres are separated by Malvern Common, the name is said to derive form the need of the Victorians to "Link" additional horses to their carriages to enable them to be pulled up the main road (now the A449) that runs through the town. Malvern Link is home to the other famous Malvern export, the Morgan Car, founded by H.F.S Morgan in 1909 the cars are still hand made at the factory in Pickersleigh Road their home since 1918. To the south of Great Malvern is Malvern Wells; Malvern Wells is a comparatively new entity, formed in 1894 it was formally known as South Malvern it also incorporates Wyche, a historic crossing place through the hills between Worcestershire and Herefordshire. It is named after the areas wells principally Holy Well and Eye Well. Malvern Wells is the last resting place of Sir Edward Elgar who is buried in St. Wulfstan`s Church. It is home to the Three Counties Show Ground which is the venue to many agricultural events including the Three Counties Show and the RHS Malvern Flower Show, it is also home to a National Collection of Pear Trees and currently growing around 60 varieties. South of Malvern Wells is the small enclave of Little Malvern; Little Malvern Priory was built by the Benedictines in the 12th century but little now remains, the Priory Church was re-built in the latter part of the 14th century, The Priory was dissolved by Henry VIII in 1534 and sold to a John Russell who in turn sold it to his son! Henry Russell with a stipulation that the church should remain in use for the parishioners. The remains of the Priory and a Victorian house now make up Little Malvern Court which has been in the hands of the Berington family (decedents by marriage of Henry Russell) since 1539. The house and gardens are open to the public for limited periods. Malvern gets it`s name from the Celtic Moel-bryn (Bare Hill), the area is managed by the Malvern Hills Conservators who were established in 1884 to "protect, control and manage the lands" but had a long struggle to limit the damage done by quarrying which went on until the 1970`s. There are now over 100 miles of pathways and over 70 wells to quench your thirst in order to enjoy "one of the goodliest views in England".

Places to Stay near Malvern

"The Cottage" is magnificently set high on the Malvern Hills, enjoying 30 mile views across the Severn Valley to the Cotswold Hills that form the horizon. Nominated "the best view in England" by the London ... More | visit website
map book

Colwall Park is a country house style hotel on the sunny western slopes of the breathtaking Malvern Hills in the centre of peaceful Colwall village, situated less than 10 miles from ... More

The Wyche Inn is a traditional public house situated high in the Malvern Hills. It offers unopposed views of the Severn Vale and the Cotswolds. The stunning walks of the Malverns are on the doorstep for ... More | visit website
map book

With superb local food and an 18th century oak bar, The Malvern Hills Hotel is located in the heart of an area of outstanding natural beauty. The hotel is close to the ... More

No 5 B and B is a beautiful Victorian Gentleman's residence, recently refurbished to a very high standard and nestled at the foot of the Malvern Hills. The vibe is laid back. Guests can relax ... More | visit website
map book

Park View luxury serviced apartment is in an excellent location, only minutes from Malvern Theatre and the centre of Malvern and just a short stroll to the Malvern Hills. It ... More

The Abbey's setting is one of the most perfect in the country, close to many interesting cities, yet situated right at the heart of the countryside at the foot of the Malvern Hills. The hotel ... More | visit website

Occupying a central location within Great Malverns town centre, this characteristic Queen Anne building offers a warm and friendly welcome to all of its guests. Unwind and enjoy the beautiful Town and ... More