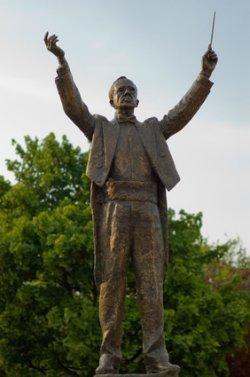 Go to our Edward Elgar page
The greatest British composer of his generation, Elgar like Britten after him was an outsider. Elgar was a Catholic at a time when there was still much discrimination against those of his faith. When he was trying to make his name in the late Victorian era class distinctions were set in stone, and as the son of a piano tuner and music shop keeper he was regarded as beneath his more gentlemanly contemporaries  his wifes family tried to prevent their marriage  Elgars family was in trade! And to rub salt in conservative and hierarchical British wounds he had the gall to be largely self-taught.
Though he lived for short periods in London , it was outside the capital that he felt at home, and that provided the surroundings to inspire his music.
Elgars birthplace in the pretty village of Broadheath, just three miles outside Worcester , is now a museum dedicated to the composer, with The Elgar Centre beside it focused on his work. It is a solid but charming redbrick building, perfectly in keeping with the gentle nature of the man and his humble origins, the frontage complete with the pitch-roofed porch of the archetypal country cottage.
It is Worcestershire and the city of Worcester to which Elgar was drawn throughout his life, even when his eventual success in the metropolis and then worldwide saw him travelling in Europe and having his main residence in Hampstead . This is middle England without the disdain that phrase too often implies, an area with great history and true charm. Worcester Cathedral was of enormous importance in the composers life: here many of his works were premiered; and long before then he had begun his personal exploration of musical history by borrowing books from its library; he returned to the cathedral library in later life for solace and tranquillity.
Elgar is celebrated at the Cathedral by a stained-glass window depicting a scene from his Dream of Gerontius. There is another commemoration of Elgar in Worcester, a statue in the High Street, near where his father kept a music shop that was for a time the future composers home and workplace.
The beauty of the very British countryside of the Malvern Hills is often reflected in Elgars music. When he first failed in London he and his wife returned to live in Great Malvern, where he had met his wife Alice when she was one of his violin pupils. They moved into Forli in Alexandra Road where they spent eight years before moving up in the world and into Craeg Lea in Malvern Wells, with Birchwood Lodge in the Malvern Hills as an easily accessible country retreat. A walk in the Malvern Hills would inspire the most prosaic amongst us with the views of distant towns and counties to enthral the rambler.
Among the hills that he explored on foot and on his beloved bicycle he gained the inspiration for his best known work The Enigma Variations; here he found the Iron Age fort that inspired his cantata Caractacus; The Dream of Gerontius too was written while he lived in Malvern . The church of St Wulstan in Little Malvern is Elgars burial place, a suitably quiet and beautiful spot.
Other Cathedral cities loomed large in Elgars life, Gloucester and Hereford , where he had musical friends like him apart from the fashionable scene in London. All three seem to have been bypassed somewhat by economic change, retaining in their centres in particular structures of great antiquity illustrating their greater importance in much earlier days.
The Three Choirs Festival , held annually at each of Hereford, Gloucester and Worcester in turn, was the source of work and pleasure for him in his lifetime, and today is very closely associated with his works. By the banks of the Wye in Hereford he was challenged by a friend to set to music the tumble his bulldog had taken into the water, a moment that became the 11th of his Enigma Variations. A little further along the Wye at Mordiford on the B4224 Elgar would fish near the medieval bridge, having cycled from Plas Gwyn, his house in Hereford from 1904 to 1912.
During his life Elgar mentioned two places as spots he would be likely to haunt after his death. One is too vague  the bracken in the Malvern Hills  to offer a ghost hunter much chance of tracking him down; the other is far more specific, the pretty wooded lane between the Worcestershire villages of Drakes Broughton and Wadborough, where indeed some claim to have felt his spirit. If you meet him there, give him my regards and thanks.