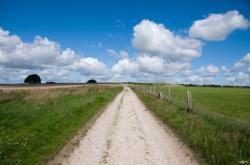 Often described as Britain's Oldest Road, the Ridgeway runs for 85 miles (137km) between the chalk hills of Overton Hill, near Avebury and Ivinghoe Beacon in Hertfordshire . The road goes through four English counties and has probably been in use since the time of prehistoric man. The Ridgeway is now very popular with walkers but the stretch that runs through Wiltshire is still remarkably remote. The route crosses the ridge of archaeologically rich downland between Overton Hill in the south west of the county and Uffington White Horse, on the Oxfordshire border. Walk here on the Ridgeway in Wiltshire and you follow in the footsteps of walkers over thousands of years as you travel through the historic landscape.

Starting from the east in Oxfordshire Wantage would be a convenient place to stop the night before you set off on your trek. La Fontana is an Italian family run restaurant with accommodation thats situated on the outskirts Wantage. The 15 spacious bedrooms there are all en-suite and benefit from complimentary wireless broadband internet access. A statue of King Alfred the Great stands in the market place at centre of the town and hints at the rich and ancient history of the region. From Wantage you join the Ridgeway as it enters the Vale of the White Horse. The Uffington White Horse , the grand equine effigy carved into the chalk at White Horse Hill, overlooks the entry of the Ridgeway into Wiltshire. An Iron Age hill fort there guards the area and watches over the ancient highway as it enters Wiltshire from neighbouring Oxfordshire. As you head west youll pass close to the village of Ashbury. Here youll find Wayland's Smithy , a Neolithic long barrow and chamber tomb that was fully restored after excavations in the 1960s. You rarely get to see these ancient burial mounds looking as they would have done thousands of years ago so its worth the short detour for a look. After Waylands Smithy the Ridgeway passes near to Wanborough , a small Wiltshire village that dates back to at least the fourth century. The parish church of Saint Andrew there has a spire at one end and a tower at the other, making it one of only three parish churches to have this feature in the UK. The village tempts one to tarry a while by offering not only a post office and village shop but also several pubs . If you happen to be in the village on the third Saturday of the month youll even catch the farmers market.

As the Ridgeway passes Swindon it also runs close to another site deeply rooted in antiquity. Liddington Castle is the Iron Age hillfort that is thought possibly to have been the site of the Battle of Badon, where the British defeated the invading Saxons between 480 and 500AD and checked their advance for 50 years. Such was the strategic importance of the Ridgeway that many forts and battle sites can be found along its route. Overton Hill is another area boasting a past so distant that we can only guess at what sights it has seen. There are several round barrows (burial mounds) there and it was once home to a wooden circle known as the Sanctuary.The 571 ft (174 m) hill stands at the southern edge of the Marlborough Downs in Wiltshire, England, just west of the village of West Overton and 4.5 miles from the town of Marlborough and marks the one end of the Ridgeway National Trail. Nearby is another famous ancient site at Silbury Hill. The ancient Wiltshire market town of Marlborough is an ideal place to break for food or even an overnight stop. You could leave the Ridgeway where it crosses the A346, near Ogbourne St George and head south into Marlborough. The Ivy House Hotel on the High Street in Marlborough is a grade II listed Georgian building with a 300 year history as well as 28 bedrooms and an award winning restaurant. Oak timbers that predate the coming of the Spanish Armada were used to build the Castle and Ball Hotel and restaurant. Also on the High Street the hotel is located on a plot thats been home to an inn since at least the 15th century.

If you head north back up the A346 after leaving Marlborough you will pick up the Ridgeway near the Ogbourne group of villages. Heading west from there you soon arrive at the site of Barbury Castle . This is another of the many Iron Age hill forts found along the ancient Ridgeway route. The castle, situated on Barbury Hill, is now managed as a country park by Swindon Borough Council. The hill is a local vantage point and can command a view across to the Cotswolds and the River Severn if the weather favours the viewer. The old hill fort features deep defensive ditches that are still clearly visible to the visitor today. After Barbury Hill the Ridgeway swings to the south and heads past Fyfield Down. Part of the Marlborough Downs, Fyfield Down boasts a collection of sarsen stones known locally as Grey Wethers. They stand just 1.5 miles north of the village of Fyfield in an area now designated as a Site of Special Scientific Interest (SSSI).

To the west of Marlborough and Fyfield is Avebury. Situated just a few miles from the Ridgeway, Avebury is on one of Britains most important ancient sites. The famous standing stones at Avebury are just the still visible part of a much larger site that itself sits within an array of prehistoric sites, barrows and avenues. The ancient manor house at Avebury is worth visiting. The buildings that make up the house date from the early 16th century, but has Queen Anne alterations and underwent an Edwardian renovation. Ancient walls and clipped box hedges in the garden create outdoor 'rooms' there and it is an excellent place to take a picnic in good weather. The Old Forge bed and breakfast is in East Kennet, Avebury, and was once a smithy. Dates back to the 1860s it is now a four-star bed and breakfast with spacious rooms and makes an ideal place stay at the end of your short trip along the Ridgeway.