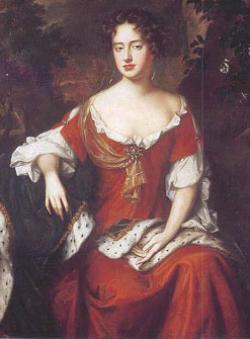 Queen Anne was born on the 6th February 1665 at St James Palace, London, the second daughter of James VII & II, who was Catholic, her mother was Lady Anne Hyde, her elder sister Mary was destined to reign as Mary II. Her early life was influenced greatly by Charles II, and she was raised as a Protestant, she lived with her grandmother Lady Henrietta of France, in France.

Her sister Mary married William Of Orange in 1677 encouraged by her uncle Charles II, although she was twelve years younger than him, and they moved to Holland. The Glorious Revolution came about when James II was king, and his Catholic wife produced a male heir, this brewed discontentment amongst the subjects and after a series of events William was invited to England to claim the Crown, as it was felt that as James was in exile he had in fact abdicated. James was deposed in 1688, and the crown was offered jointly to both William and Mary, in order to rescue England from a Catholic take over. They moved to Hampton Court on the outer edge of London, they were a popular choice. Mary died of smallpox in 1694, and William continued to reign until 1702.

Anne married George Prince Of Denmark on 28th July 1683, she suffered poor health throughout her life, and although she had 17 pregnancies, tragically only five babies were born alive, yet none survived to inherit the throne. She succeeded to the throne in 1702, and due to her very poor health was carried into the Coronation ceremony by Sedan Chair. She had a great friend and confident in Sarah Jennings, which was to prove instrumental in future events. It had been her influence that had persuaded Anne to lend her support to William, which had resulted in James fleeing in exile and both William and her sister claiming the crown. Sarah was to be honoured with the role of Lady of The Bedchamber, her husband John Churchill led the victory of the War of the Spanish Succession and they were given Blenheim Estate in the Oxfordshire Cotswolds, by Anne and many other lavish gifts, unfortunately their relationship took a turn for the worst after forty years when they fell from favour.

Anne saw an important page of history written when on the 1st May 1707, England and Scotland united into one single kingdom, Anne became the first Sovereign of Great Britain in 1708. Although she also became the last of the Stuart Monarchs to rule when she died on August 1st 1714, at Kensington Palace. She was later buried at Westminster Abbey. After which her cousin George I succeeded her.

Contributors: Do you have a site related to Queen Anne?
Supply some content for this page and we will gladly add a link to your site. Email here.