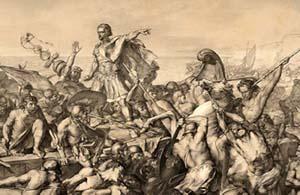 Much about Julius Caesars expedition to Britain in 55BC is debated by historians: the actual day of arrival is a best guess; and the motivations for the landing were contested even in Roman times. Likewise no hard archaeological evidence has been found of the camp the X and VII legions, brought across from Boulogne (probably), established once they had fought their way up the beach harassed by British warriors. But indications are that the shingle beach at Walmer near Deal was the place where Caesar stepped ashore.
Dover with its natural harbour had been the original choice for a beachhead, but cliff-tops lined with javelin throwers forced a rethink. Once ashore the legionaries had to forage for food. Circumstances having kept their cavalry from landing restricted their ability to crush British forces harrying them. Eventually the Romans, kept within a narrow coastal band by lack of numbers and concerted opposition, withdrew to France before winter could set in.
Given the Roman force was far from overwhelming, and brought little heavy equipment, it seems likely this was not an invasion but a reconnaissance, albeit in strength. The following year a far larger army returned to Britain. As to motives, Caesar himself justified the move as a reaction to British support for Belgic rebels in Gaul; others speculate that tin and copper wealth, even gold and silver, attracted him; and in his own time British pearls were suggested as the draw. Equally likely is Caesars need for glory and conquest. Rome indeed celebrated his 55BC expedition, but greater success would come in that of 54BC.