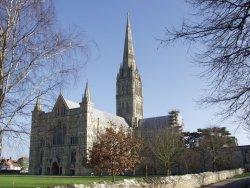 Salisburys cathedral, first built in 1227, has the tallest spire in Britain at 404 feet, the early Gothic style building one of the citys gems. Nearby is Wilton House, an Elizabethan manor open to the public and Stonehenge, its prehistoric standing stones a great public draw. - Carol

The park & Ride is the ONLY way to visit salisbury for the day. There appeared to be plenty of zealous traffic wardens lurking - Nadia
Discover a part of traditional England when you visit Salisbury - just two hours away from central London and with 6,000 years of history, this region offers the ultimate getaway. The massive Iron Age hillfort of Old Sarum is the site of the original City of Salisbury. The fort was used by the Romans, Saxons and Normans and grew into one of the most flourishing settlements in medieval England. Infighting and a lack of water led to the City being relocated to the Salisbury that we know today and it was here that the world-famous Cathedral was built between 1220 and 1258. Salisbury Cathedral is the only Cathedral in England to have been built throughout in the same Early English style and possesses the tallest spire in England, the world's oldest working clock and one of the four surviving copies of the Magna Carta - Irene