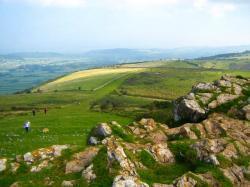 Clutton Hill in Somerset lies in the middle of a triangle made by the intersections of the A37, A39 and A368. It is about eight miles to the southwest of Bath, around the same distance south of Bristol and about 10 miles due north of Shepton Mallet. It has its own airstrip for light aircraft enthusiasts, which is the home of Wessex Aero Club. The airstrip was threatened with closure after some local residents complained about the noise, but it was decided that the airstrip did not constitute sufficient nuisance to warrant shutting it down. The most famous watering hole in Clutton Hill must surely be the Hunters Rest Inn, a beautiful country inn that was built around 1750 high on Clutton Hill. It boasts excellent rooms as well as a miniature steam railway a third of a mile long, which carries passengers through its landscaped gardens. The Inn was originally built as a hunting lodge for the Earl of Warwick. When a subsequent Earl sold off the estate in 1892, it became a tavern and smallholding, serving the thirsty miners in the area. When the mines closed, the Inn lived on and still serves travellers today. Visitors to Clutton Hill will be treated to stunning views of the Chew Valley, the Mendip Hills and nearby Bristol.