B and Bs in Wick 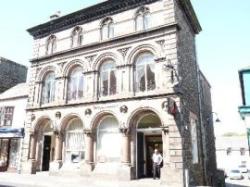 Bank Guest house is a family run business situated in the centre of Wick. The views at the back overlook the countryside and it is also only a short walk down to the harbour. next to bus station and train station Bank Guest house is close to the shops, and also to some lovely restaurants such as Bord De L'eau (French), Mackays (Traditional), K2 (Indian), and of course Silver Darlings who do beautiful steaks!LocationWick is also approximately 20mins from John O'Groats which makes it a perfect rest stop for the ferry to Orkney or the Shetland Islands!The FamilyThe Bank Guest house is run by Angela, Willy and little Hannah. They purchased the building three years ago and have been renovating ever since.Angela is a seamstress, her work can be seen in some of wonderful curtains around the house, she runs her own sewing business.Willy is a fireman, and also spends all his spare time working on the Guest house itself. Hannah is the newest addition to Bank house and has just turned one. She loves meeting new people and will probably give you a cuddle!