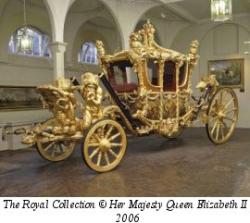 One of the finest working stables in existence and a living part of Britain's heritage, the Royal Mews is responsible for all road travel arrangements for The Queen and members of the Royal Family. The Mews staff and their families live on site. The many coaches and carriages on display include the luxurious Australian State Coach, with central heating and electric windows; and the Irish State Coach, used by The Queen to travel to the State Opening of Parliament. The most dazzling of all the coaches is the Gold State Coach, which has been used at every coronation since that of George IV in 1821 and in 2002 played a central role in Her Majesty The Queen's Golden Jubilee celebrations. It weighs almost four tonnes and requires eight horses to pull it.