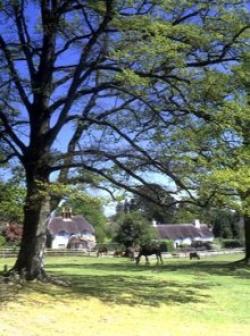 The New Forest is undoubtedly one of the South of Englands greatest treasures. Nestling between Southampton and Bournemouth in over 140 miles of glorious countryside, William the Conqueror named it his new hunting forest to be jealously guarded against any possible threat to the chase of the royal deer. Little did he imagine that nearly 1000 years later his Nova Foresta would still maintain its mystery and romance. This most English of forests continues to be a living and working community where ponies and cattle still have the right of way as they freely graze the land.

If you are lucky you may see one of the many deer or badgers who may appear from the undergrowth. The wildlife is undoubtedly one aspect of the forest that whatever time of year you visit you will be sure to enjoy. The countryside itself, the spectacular rolling heathland, the leafy glades and canopies of mighty oak and beech, the numerous streams winding their way through ancient woodland  nature at its best.

Wherever you stay in the New Forest you will be treated with the same hospitality and friendliness have welcomed thousands of visitors over the years. The forest is renowned for its friendly and homely bed and breakfast establishments. There are also some remarkable hotels, many of which used to be former royal hunting lodges and now sit in spectacular locations with forest views and unspoilt scenery. Of course those who want to experience the real outdoors can enjoy the basic appeal of camping. For families there are award-winning Holiday Parks that rank amongst the best in the country.

The forest is a Mecca for cycling, walking and horseriding. Close by are the world-famous attractions of Beaulieu and Exbury Gardens. From Roman Villas to castles of Henry VIII there is something for all the family including the souths leading leisure park - Paultons. For those with a more nautical persuasion then the watersports on the forests coast are a must and the quaint maritime port of Lymington with its yachting links is a great place to wander along cobbled streets and pick up a bargain at the Saturday market.