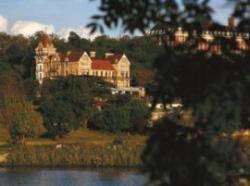 Standing high on Richmond Hil, in the heart of London's countryside, The Petersham commands breathtaking views over one of the most famous and attractive stretches of the River Thames. Eight miles from the centre of London, the West End and Heathrow Airport. The hotel was built in 1865 and is privately owned. To this day the Petersham's individuality remains as valuable as its independence.The original character of the hotel emanates from the hotels's architecture which, as well as its landmark tower, also features the longest unsupported stone staircase in England!