B and Bs in Linlithgow 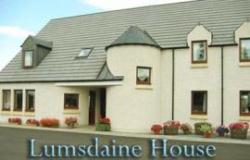 LUMSDAINE HOUSE is an attractive family home with spectacular views of rolling countryside. The setting is idyllic and quiet with the canal just outside; perfect for that gentle stroll after your full Scottish breakfast. Situated on the A706 just west of Linlithgow, it offers the ideal base for touring central Scotland. The M8 and M9 and Linlithgow railway station all within easy reach. Linlithgow lies roughly midway between Edinburgh and Stirling and is what is known in Scotland as a Royal Burgh it is an historic town well known for the Linlithgow Palace and The North Union Canal. The Place is best known as the birthplace of Mary Queen of Scots, the ruins of the palace overlook the town to the south and extends as a promontory into Linlithgow loch on the north. Famed for its Canal there is also a Canal Centre where you can visit the museum and even hire and charter a canal boat. Edinburgh is also only 18 miles away making LUMSDAINE HOUSE and ideal base from which to explore this part of Scotland.