B and Bs in Bowness-on-Windermere 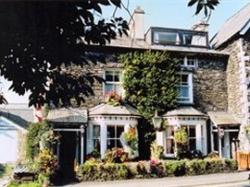 Built around 1876 in traditional cumbrian Stone we are situated in a quiet corner of the village, with a superb choice of restaurants, shops and traditional pubs just a few minutes walk. Bowness Bay is just a six minute walk. Try a boat ride on Lake Windermere, visit Beetrix Potter's house nearby, cycling round grizedale forrest, canoeing, horse riding, walking or try a train journey on the Eskwale & Ravenglass narrow gauge railway through some of the most scenic views in england and all the sights you could wish to see. There is so much to see and do people always come back for more. Bowness-on-Windermere is a sprawling tourist town on the shore of Windermere, about halfway along the 12 mile length of the lake between Waterhead at the North end, and Lakeside at the South end. It developed after the opening of the railway line from Oxenholme and Kendal to Windermere in 1847. Bowness was the nearest accessible point on the lake. Bowness-on-Windermere is Cumbriaâs most popular destination, with the town busy for much of the year. People come to enjoy the lake for sailing and watersports, or just to relax and enjoy the atmosphere of the area and the townâs delightful setting. The Victorian influence can be seen everywhere - in the late 19th century, wealthy businessmen from Lancashire built large residences overlooking the lake, and many of these have now been converted to hotels, such as the Langdale Chase Hotel, Storrs Hall Hotel, and the Belsfield Hotel. Others houses include The National Park Visitor Centre at Brockhole, between Ambleside and Bowness. For a nice end to your day, relax in our cosy lounge, watch tv, read or have a relaxing drink.