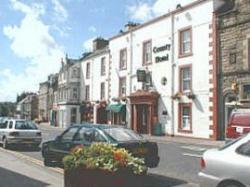 Pleasant and friendly privately-run hotel in town centre. A characterful building with a long history. The County Hotel, awarded 3 star small hotel grading by Visit Scotland, is situated on the Market Square of the beautiful and historic border town of Selkirk, on the a7 road from Edinburgh to Carlisle. It was built originally as a coaching inn on the site of the infamous 'Bunch of Grapes' hostelry. The hotel's past is steeped in history due mainly to the meetings of the 'Forest Club' held in 'Scott's Ha'', where members of the invited guests featured such names as Sir Walter Scott, The Duke of Wellington, Prince Leopold of the Belgians and Mungo Park to name but a few.