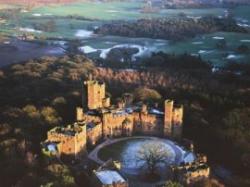 Add your review
Good Points: Location. Facilities.friendly staff, Bad Points: A room with a view over the centre of the castle would have been nice we were in room 109. I can't really say this is a bad point because value for money was excellent. General review: Excellent we are planning our next visit.

Add your review
Good Points: Great value accommodation, great view from window of our rooms overlooking the grounds. The room was clean, comfortable and inviting, couldn't fault it. Bad Points: Nothing at all just wish that we were able to use the fire in our rooms, we had read in a previous reviews that other guests had been able to but ours was bocked off but fire place still looked great and heating in rooms more than adequate. Perhaps they don't use the fire's in the rooms anymore because of health and safety which I suppose is fair enough. General review: Accommodation was superb and the staff were very helpful. We felt it to be a perfect location for a short-break, whether it be for a romatic break with your loved one or with friends. The surrounding area has plenty of walking trails to try if your feeling energetic and fishing areas for that extra bit of peace and quiet. We found good local pubs and restaurants within a mile or two of the Castle. We drove to Chester for a day to do some sightseeing and shopping; Chester was very easy to access from the Castle. We were also very interested in the various theme nights the Castle has to offer such as The Murder Mystery evening dinner which we think we might try next time we visit. Just wish we had realised in advance that the Castle was actually having a Murder Mystery the very weekend we visited as we would have definately gone and brought some extra friends along too.

Add your review
i, attended a wedding of dear friends and stayed the night at the hotel. Most of te staff were polite and efficient and helpful. However at the evening reception, I had to whom I was told was the wedding co-ordinator to raise concerns about two of my friends finding gravel in their desserts. His explanation fell short of being a reasonable response as he assured me that he could not explain how the gravel had been found in the desserts.Then later in the evening i was ordering drinks at the bar in the reception and even though the staff were not overly friendly they were efficient. Whilst standing at the bar I heard someone saying "LIKE PIGS TO A TROUGH", I then queried this with the bar man serving me, he told me that it was the manager from the medieval banquet, whose voice I had just heard. I expressed my concerns about the comment as the buffet had just opened to the wedding I was attending. The manager concerned later came to see me, and stated that he had not meant anything by the remark as he was talking about the banquet he was "managing" I asked in what context he had meant and was not satisfied with the response, as he could not really give me a reasonable explanation. I am very concerned, given that the people who are given the responsibility of these managerial roles are not competent to carry out these roles in a very good manner.