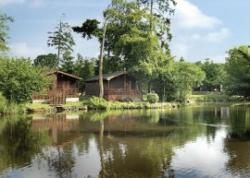 Add your review
Very disappointing, the bumpy muddy track with many puddles leading to the lodge should be taken as a warning. The lodge was old and not double glazed, which, added to an electrically thirsty emersion heater, made it very expensive to keep feeding the electric metre! Heating was via a 2KW heater in the main room, a 2KW in one bedroom and a 3KW in the second bedroom, until we swapped the 3KW into the main room it barely came above zero, totally in adequate for the winter months. Resulting in a very cold and damp lodge, we kept our coats on much of the time. The anti slip mat for in the bath was mouldy, the shower in the middle of the bath had no safety hand rail to aid getting in and out of the bath, there was no mat for the bathroom floor [slippy if wet]. Because the shower was in the middle of the bath, pointing across the bath instead of along, the shower curtain stuck to you the whole time you attempted to have a shower. A lodge for 4 people had a kitchen with only enough work surfaces to put 2 plates on, the only empty cupboard for food storage was under the kitchen sink! Had to wash the dirty mugs before we could use them. The television, which they were so pleased now had freesat, was very potluck as to what stations would be available, normally different from morning to night and also changing through the evening.