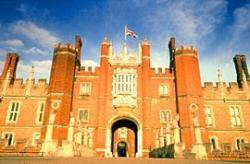 A Man for all Seasons

Year: 1966
Director: Fred Zinnemann
Cast: Paul Scofield , Wendy Hiller , Susannah York , Robert Shaw , Orson Welles, Leo McKern, Nigel Davenport, John Hurt , Corin Redgrave, Cyril Luckham, Jack Gwillim.
Set Locations:
The Man for all Seasons is set around one of the defining points in British history; the dispute between King Henry VIII and the Catholic Church over his divorce from Catherine of Aragon. The film focuses on the last seven years of Sir Thomas More. Thomas was made Henry`s Chancellor after the failure of Thomas Wolsey (Cardinal Wolsey), who was the Archbishop of York, Henry had sent him to Rome to petition the Pope for an annulment from his first wife, Catherine of Aragon; Catherine had failed to produce a son, only a daughter Mary. Henry had also fallen for the ambitious Anne Boleyn - Wolsey failed in his mission. He was charged with treason but died on his way to London to face trial. Wolsey was replaced as Chancellor by Thomas More , Thomas was one of the leading humanists of the age and a well respected figure. Henry went ahead with the divorce and Thomas resigns as Chancellor hoping for a quiet life as a private citizen. Henry was still keen to obtain Thomas`s approval for his actions but Thomas, strongly opposed his marriage to Anne Boleyn, was imprisoned for treason and he was executed for his opposition to the Act of Supremacy whereby Henry asserted control of the English Church.

Most of the filming took place in and around Hampton Court Palace which sits on the banks of the river Thames about 12 miles up stream from Charing Cross. The palace was built by Cardinal Wolsey who had obtained a small manor house on the site in 1514 and converted it into one of the most magnificent country houses of the Tudor period. In 1528 Wolsey, in an attempt to curry royal favour after his failed mission to Rome, gave the Palace to Henry VIII. Henry added a Library - there were already 280 rooms in the Palace - and additional kitchens, he also replaced the Great Hall and refurbished the chapel. Gardens were laid out and deer introduced to the surronding woodland (some of which remains as Bushy Park). The Palace remained a popular residence for the royal household up to the time of George III. Even Oliver Cromwell lived here between 1651 and 1658. In 1689, King William III & Queen Mary II carried out extensive re-building using Christopher Wren who redesigned part of the Palace in the French Renaissance style, which blends in well with the Tudor architecture. A fire in 1986 damaged part of Wren`s south wing and during the restoration some of the Tudor features that he had covered up were rediscovered. The Privy Garden was restored in 1995 to its original design as laid out in the late 17th century.

The film was one of the biggest hits of 1966 and nominated for eight Oscar`s, winning no less than 6, including those for Best Actor to Paul Scofield for his portrail of Thomas More; Best Director, Fred Zimmerman and Best Picture. It also won no less than 27 other awards including 6 BAFTA`s and 4 Golden Globes. Some of the river scenes were shot on the Beaulieu River in Hampshire, which flows through the New Forest on its was to the Solent. One of the best known features of Hampton Court is the Maze; it was planted between 1689-95 by George London and Henry Wise and is thought that it replaced an earlier maze of Wolsey`s time. Origianlly planted with Hornbeam the maze occupies a third of an acre and in total the walk is about a half-mile (if you don`t get lost!). Hampton Court is also home to one of the Britain`s largest flower shows, the RHS Hampton Court Flower Show , held in every July. Sir Thomas More`s book, Utopia, written in 1516 descriding an ideal city state, is still available in print.